For Trump, the buck always stops somewhere else 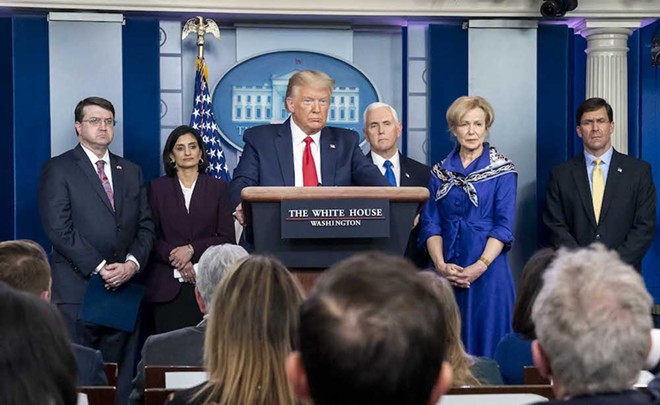 In six words on Friday afternoon, Donald Trump summed up not only his team’s botched handling of the coronavirus outbreak but also his approach to the presidency generally: “I don’t take responsibility at all.”

Surrounded by corporate execs, Trump used the Rose Garden press conference to (finally) declare a national emergency. Mostly, however, the event was designed to assure Wall Street that the White House had (finally) gotten its act together. It had the desired effect; the market rallied. Then on Sunday, the Fed announced that it was cutting its benchmark rate to zero, and Dow futures cratered. The market giveth, the market taketh away.

Naturally, Trump’s passing the buck was rooted in mendacity. He said he had inherited unspecified “rules, regulations, and specifications from a different time” that hindered his ability to ramp up coronavirus testing, which wasn’t true. Trump then disclaimed his administration’s decision to disband the National Security Council team responsible for global pandemics: “And when you say me, I didn't do it. We have a group of people. … You say we did that. I don’t know anything about it.”

Trump isn’t responsible for the fact that the coronavirus is here. There’s nothing he or any other president could have done to stop that from happening. But as the number of COVID-19 cases rises over the next several weeks — probably significantly, possibly exponentially — he will bear responsibility for thousands of avoidable deaths.

The president is in over his head, his administration is flailing, and Trump can’t bluster his way out of a pandemic like he has so many self-made crises.

As I write this on Monday morning — two months after the first confirmed American case, on January 21 — the U.S. has tested about 38,000 people for coronavirus, with about 3,500 positives. Of those, 65 have died. That’s a fatality rate of 1.8 percent; for comparison, the seasonal flu’s mortality rate is below 0.1 percent.

South Korea’s first case was confirmed just a day America’s was. By Friday, it had tested 250,000 people. Rigorous testing and rapid processing have enabled the South Koreans to isolate people with the virus, treat them early, and detect outbreaks as they emerge.

The U.S.’s failure stemmed from both bureaucratic bungling and the administration’s ineptitude. The result was that there weren’t enough tests, so tests were rationed. In the last week, I’ve corresponded with a half-dozen people in the Triangle who were symptomatic but couldn’t get tested. One had just come back from Spain, which is now on a coronavirus lockdown. (On Saturday, after a week of trying, she finally got tested at an urgent care clinic; she’ll get the results later this week.) Another had returned from New York City with flu-like symptoms and tested negative for the flu. Another had been to a conference in Baltimore where an attendee had been diagnosed with COVID-19.

Trump’s dismissiveness, echoed by the right-wing media, has turned the coronavirus into a partisan issue. tweet this
But there was also a lack of urgency that came straight from the top. From the crisis’s earliest days, Trump — desperate to keep the numbers of sick low and fearful of spooking the markets and harming his reelection — downplayed the seriousness of the situation, assuring Americans that the coronavirus was no big deal, and it would all be over soon.

Those are weeks we’ll never get back. It’s not just that we’ll never know how many coronavirus cases slipped under the radar — perhaps nine or 10 times the official count — and how many people are spreading the virus without knowing it. It’s that we lost our chance to contain emerging clusters and isolate and treat people with the virus early on. Also, with more information about how COVID-19 was spreading, we could have proactively implemented social distancing.

So instead of containing the virus, the U.S. is on track to replicate the disaster in Italy, where cases are doubling every week, hospitals are running out of ICU beds, and deaths are spiking.

Here’s another thing: Trump’s dismissiveness, echoed by the right-wing media, has turned the coronavirus into a partisan issue.

In an NBC News/Wall Street Journal poll this weekend, whereas 60 percent of voters believe the crisis will get worse, only 40 percent of Republicans think so. Given that Trump’s base disproportionately comprises older people who are more susceptible to COVID-19, the Trump-fueled idea that the coronavirus has been overhyped could pose a real threat to public health.

No president could have stopped the coronavirus. But a more trusted one, a more prepared one — one who didn’t spend his first term dismantling the government expertise he now needs — could have offered the country clear and steady direction in difficult times.

But through his dissembling and disinformation, Trump has consistently made a bad situation worse, and this crisis has made manifestly clear how ill-equipped he is for the job he holds.

_
Due to the coronavirus (COVID-19) pandemic, all bars and nightclubs in Florida were closed on March 17 for 30 days. As of March 18, Central Florida restaurants are still open for takeout and delivery, and grocery stores are open during limited hours. Follow CDC guidelines and Orange County advisories on staying safe.