Disney World's no good, very bad week of ride accidents points to a bigger issue at the Orlando resort In less than a week, the Magic Kingdom saw a Jungle Cruise boat sink, an incident on the PeopleMover, and an unexpected closure of its Haunted Mansion. The no good, very bad week for Magic Kingdom points to a more significant issue facing Walt Disney World – and no matter how Disney chooses to address it, many guests will be left unhappy.

At Disneyland, many high-demand attractions, such as Haunted Mansion and Space Mountain, see multiple closures per year as the attractions receive holiday-themed overlays. These types of overlays are not as common in Orlando, where more the majority of guests visit the park once every few years, unlike the passholder-dependent California parks.

"Refurbishments generally aren’t felt as much at Disneyland as they can be at Disney World because each of Disneyland’s parks have more attractions than each of the parks at Disney World," explained Dusty Sage, CEO of Disney watchdog site MiceChat.com. "That means the temporary closure of an E-Ticket at Disneyland doesn’t cause as much impact on guests (or the wait times of other attractions) as the closure of a major ride at Animal Kingdom or Disney’s Hollywood Studios."

The story is in the numbers. Here are the numbers of official rides at the Disney parks in Orlando and California:

"All rides have a regular refurbishment schedule that is budgeted. But from time to time, show conditions require that those schedules be sped up or possibly slowed down," says Sage, to accommodate the closure of other nearby attractions. He also notes that many of Disneyland’s attractions are older, some working since 1955, and require much more upkeep. Then there is Florida's extreme weather, which requires more exterior refurbishment. 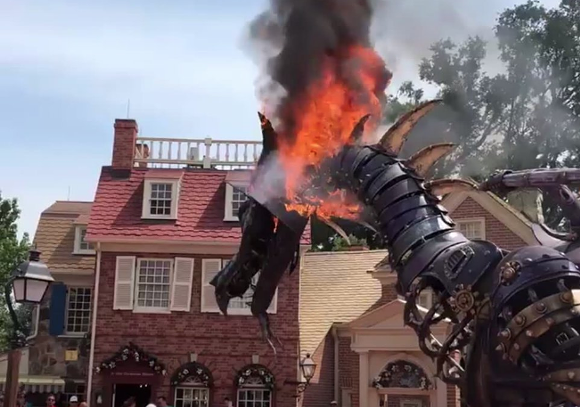 Many current and former cast members have shared their concerns with the universal budget cuts that have riddled Disney Parks, despite their record-breaking profits. It’s still unclear if former Disney Parks president and now CEO of the Walt Disney Company Bob Chapek will continue the cost-cutting initiatives he’s been credited with up until this point. After a round of budget cuts in 2016, Robert Niles of Theme Park Insider stated, such cuts will continue until guests begin voting with their wallets.

"The only way that Disney will back off cuts at its U.S. resorts will be if those cuts result in losses for the company," said Niles. "Ultimately, the parks' direction is ... determined by the decisions of Disney's theme park customers."

The issue in Orlando also seems linked to a decrease in preventative maintenance. From animatronics having their parts fall off during the middle of a show, to having multiple rides break down within the same week, its clear that the Orlando parks aren’t seeing the same level of maintenance quality they once did. This is also despite the parks operating for fewer hours per day. Many have faulted Chapek for the budget cuts across the parks division.

"The only way that Disney will back off cuts at its U.S. resorts will be if those cuts result in losses for the company." tweet this
For attractions to operate at full capacity with all of the parts fully functioning, it means many of the rides people plan their vacations around will possibly see more downtime. That means more angry guests.

Disney insider Jim Hill has pointed to Spaceship Earth’s rumored two-and-a-half-year downtime now being bumped up to only a few months, as Disney becomes more unwilling to see iconic attractions, like Haunted Mansion or the monorails, being down for the months to years required to address many of the issues they face.

Without that willingness to close the attractions for extended downtime, it will likely mean park attractions will see more shorter, unscheduled downtimes as a band-aid. With shareholders more worried about the next quarter versus the next decade, that type of piecemeal approach will likely continue – until it becomes financially clear to Disney that it cannot.