SeaWorld has big plans for 2021. Here's everything we know so far

Leading his first earnings call since taking the position, new SeaWorld CEO Serge Rivera confirmed the company was continuing the plan for events and rides, in place since former CEO Joel Manby was in the grips of responding to Blackfish.

During the call, Rivera pointed to the company’s strong 2020 new attraction lineup, saying, "this is the first time in our history we have a major roller coaster opening in each of our five largest theme parks in the same year, and all of these coasters are truly world-class coasters."

Beyond 2020, the Orlando company will continue adding new thrill rides across its six parks, while also opening a brand-new Sesame Place park in San Diego. Public documents on the upcoming lakefront coaster in Orlando, and the new rumored new swing ride for Busch Gardens Tampa, have already been posted. Now, we’re learning the company is also planning substantial new additions in San Antonio, San Diego, Williamsburg, and at Sesame Place in Philadelphia.

A swing ride like the one that opened at Busch Gardens Williamsburg is expected in Tampa next year, and is rumored for SeaWorld San Antonio. SeaWorld is known for purchasing off-the-shelf rides in sets of three. Busch Gardens Tampa’s Tigris is a carbon copy of a coaster known as a Premier Rides Sky Rocket II, at Busch Gardens Williamsburg and SeaWorld San Diego. In San Antonio, construction walls have teasers with "#RideTheTide." This is the same hashtag the company used to tease its Skyline Skywarp Horizon, which opened in San Diego last year – called the Tidal Twister. That ride, by Orlando-based Skyline Attractions, saw significant downtime. In speaking about the attraction, Rivera downplayed the issues, saying, "We had a new minor attraction that didn’t work out, as planned." With the previous issues in San Diego, it’s less likely to see SeaWorld invest in more versions of the same ride, despite fixing the early problems with the Skywarp Horizon.

SeaWorld has also been rumored to be looking at a shuttle coaster with a unique boat ride splashdown. The concept, by Germany coaster manufacturer Mack, has been around for a few years but hasn’t gotten much attention in America until Six Flags confirmed it would be adding the attraction to its parks, starting with Six Flags over Texas. SeaWorld San Antonio sits within near Six Flags Fiesta Texas, by SeaWorld adding the coaster it would be able to respond ahead of Fiesta Texas. The coaster does share many similarities with SeaWorld San Antonio's Journey to Atlantis, which lessens the likelihood of a Power Splash heading that park. 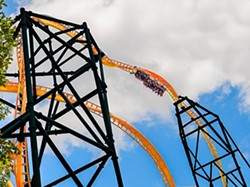 Other rumors for San Antonio include a Premier Rides multi-launch coaster. Premier Rides is not only the manufacturer of the three Sky Rocket II attractions, but also the firm behind SeaWorld Orlando’s Ice Breaker, which shares many similarities with the Sky Rocket II coasters. Once Ice Breaker opens in Orlando, the San Antonio park will be the last one without a Premier Rides attraction. Of all the rumors regarding the Texas park, this one seems the most likely. All of the rumored possibilities are noteworthy for their small footprint. This may mean that more than one of the rides will be added to the refurbished area.

SeaWorld San Antonio saw a small lightly themed area open in last year, Turtle Reef, that included both a new sea turtle habitat and two carnival-style flat rides. It was one of the first themed areas to open after SeaWorld’s internal creative department, led by Brian Morrow and Anthony Esparza, was gutted in 2018. Unlike Orlando’s Sesame Street Land, which was mostly designed by an outside group, the Turtle Reef area seems to be indicative of what future lands at SeaWorld parks may see. With that in mind, it would make sense that one or more of the off-the-shelf rides rumored for this section of the park that sits near Turtle Reef and the newly opened wooden coaster, Texas Stingray.

In California, SeaWorld San Diego has filed documents confirming its own coaster in 2021. It would replace the Wild Arctic simulator ride that closed in that park. The multi-launch coaster would be similar to the Wave Breaker coaster that opened in San Antonio in 2017. That coaster is themed to SeaWorld Rescue and features jet ski like ride vehicles. A similar ride was previously rumored for Orlando, but the park went with the more thrilling Ice Breaker instead. Orlando’s Wild Arctic is also rumored to be closing in the coming years. It’s possible it could see a ride similar to San Diego would also replace Orlando’s Wild Arctic, but a flying theater or other indoor family attraction has been rumored instead of the coaster.

The Wild Arctic coaster will surely be a big focus for SeaWorld San Diego in 2021, but the biggest news out of that city will be the nearby opening of the new Sesame Place kids focused theme park. Viewed as an alternative to Legoland, SeaWorld has a lot leaning on the success of this Sesame Place park. With no animals, low-cost attractions, and high-profile characters that have remained in demand for decades. In San Diego, the park is being built from the bones of the current Aquatica water park, which opened in 1997 as the custom-built White Water Canyon water park before becoming Knott’s Soak City and then being purchased by SeaWorld in 2012, reopening as Aquatica a year later.

Future rollout of Sesame Street Lands, like the one that opened in Orlando, and Sesame Place parks hinge on the success of the San Diego launch. The Sesame Place park in Philadelphia has seen success, but a second, mostly indoor, park in Texas only lasted two years closing in 1984. A similar concept did see some positive reception in Tokyo, lasting 16 years before closing in 2006. The Texas park was opened and operated by SeaWorld Parks’ precursor Busch Entertainment while the more successful Tokyo park was owned and operated by an unaffiliated company.

Sesame Place was originally rumored to be heading to Williamsburg, but those plans were canceled and that resort has instead doubled down on its thrill ride focus. A multi-launch shuttle coaster is also planned for Busch Gardens Williamsburg in 2021. The spike on the yet to be announced coaster may be more than 350-feet tall, making it one of the tallest coasters in the world. This comes after the world's fastest multi-launch coaster, Pantheon, opens at the park this year.

Of all the 2021 plans, one of the ones that we still know the least about is SeaWorld Orlando. Documents show a new attraction on the western lakeshore. Internally known as “Project Penguin,” the new attraction has been rumored to be flying theater or another flagship coaster for SeaWorld’s flagship sea animal park. This year’s addition, Ice Breaker, is a lower budget coaster and isn’t expected to be a significant draw for coaster enthusiasts the same way other coasters installed by SeaWorld Parks this year such as Busch Gardens Tampa’s Iron Gwazi, Williamsburg's record-breaking Pantheon, or SeaWorld San Diego’s dive coaster Emperor. That’s feeding the expectation that Orlando’s 2021 attraction will be a significant coaster that will legitimize the park as Orlando’s thrill park.

With multiple new coasters, plenty of unknown projects in the works, and an entirely new kids theme park, 2021 will be one of the most significant years yet for SeaWorld’s new post-Shamu rebound. The jury is still out on how much longer this playbook will work, but with SeaWorld continuing to beat market expectations, it makes sense to double down on the success. For fans of coasters and theme parks, that means big thrills at SeaWorld for years to come.