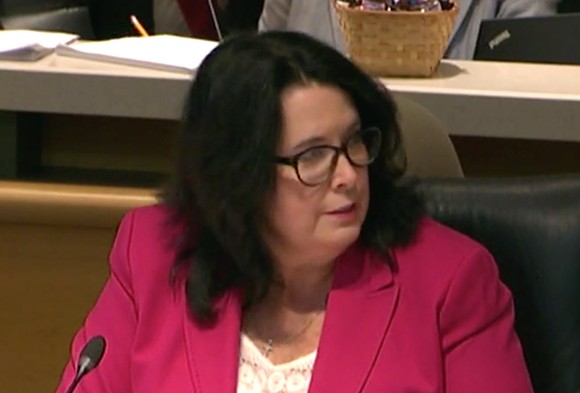 The Florida Senate on Tuesday unveiled an education-budget proposal that includes $500 million for teacher salary increases and no funding for bonus programs, a departure from Gov. Ron DeSantis’ more-ambitious teacher pay plan.

DeSantis has made a top priority of two initiatives that would set a $47,500 minimum salary for public school teachers and create a new bonus program for teachers and principals.

His plans, which would require approval from the Legislature and would cost taxpayers about $900 million, are at the heart of his promise to make 2020 the “year of the teacher.”

Senate Education Appropriations Chairwoman Kelli Stargel, R-Lakeland, said the initial Senate proposal supports the governor’s teacher pay plan “quite a bit.” But it differs on issues such as providing pay increases to longstanding teachers, who might make more than the proposed $47,500 minimum.

“A little bit of our differences with the governor is that we did want to recognize veteran teachers,” Stargel told the News Service of Florida.

The Senate’s plan would set aside $500 million for teacher salary increases, $100 million of which school districts would be allowed to spend on pay raises for veteran teachers and other employees such as librarians, school counselors, nurses and pre-kindergarten teachers.

“The fatal flaw in the governor’s plan is its shortsightedness.” tweet this
The remaining $400 million, Stargel said, would be used by school districts to try to get to the goal of a $47,500 minimum salary. DeSantis’ office has estimated it would cost $602 million to meet the minimum salary statewide.

Under the Senate proposal, if a school district meets the minimum salary threshold and additional money is left over, Stargel said local officials would be allowed to use the extra funds for other pay raises that would be negotiated with local teacher unions.

“This is a stronger way to really send the message that we value our teachers at the state level, and we hope our districts will do the right thing and provide them with teacher salaries,” Stargel said.

The budget proposal also exposed another divide between the Senate and the governor’s plans: Senators wouldn’t fund teacher bonus programs.

DeSantis has asked the Legislature to abolish the Best and Brightest bonus program, which has been beset by controversy since its creation in 2015, and set aside $300 million for a new program that would target higher bonuses for teachers and principals who work at public schools in low-income areas.

The Senate proposed eliminating the Best and Brightest program to free up $284.5 million for teacher salaries in the upcoming fiscal year. No additional funding would be provided for the governor's new bonus program.

“We did not do a new bonus program. We put it straight into the teacher salary package,” Stargel said.

The Florida Education Association statewide teachers union, which has been critical of DeSantis’ plan, offered an upbeat response to the Senate proposal.

“The proposal is certainly encouraging, and we look to continue our conversations with the Senate,” union President Fedrick Ingram said in a statement. “(Senate) President (Bill) Galvano has started a process that gives us many levels of common ground. We appreciate the efforts and look forward to discussions that will expand the amount of funding available to our schools and treat all public education workers in a more equitable way.”

Senate Democrats on Jan. 13 unveiled a $900 million plan that would offer pay raises to all instructional personnel at public schools, not just classroom teachers.

Senate Minority Leader Audrey Gibson said at the time that the Democrats’ proposal addresses the “mistakes” in the governor’s minimum-salary plan, which she said would leave out almost 100,000 veteran teachers.

“The fatal flaw in the governor’s plan is its shortsightedness,” Gibson, D-Jacksonville, said. “No successful business would ignore rewarding loyal, veteran employees while almost exclusively raising the salaries of new ones.”

The new Senate proposal appears to address some of the Democrats' concerns by including money for veteran teachers and other instructional personnel. But the real negotiating will take place with House leaders near the end of the legislative session in March.

The House is expected to release its initial teacher-pay proposal on Wednesday, but House PreK-12 Appropriations Chairman Chris Latvala, R-Clearwater, said last week his subcommittee was recommending $462 million for teacher pay raises and slashing funding for the Best and Brightest program. House Speaker Jose Oliva, R-Miami Lakes, also said he would support getting rid of the Best and Brightest program.