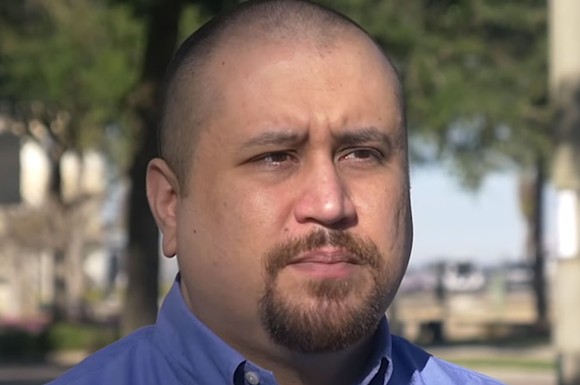 George Zimmerman wants your attention again, along with millions of taxpayer dollars.

The violent, stalking, racist creep – and former self-appointed neighborhood-watch captain who shot and killed unarmed teenager Trayvon Martin in Sanford on Feb. 26, 2012 – has announced he is suing nearly everyone from his criminal trial, where he was acquitted of second-degree murder.

The suit names Martin's parents, their attorney, a star witness in his trial, the prosecutors in the case, the state of Florida, and the Florida Department of Law Enforcement, in seeking $100 million.

A release from his attorney, former federal prosecutor Larry Klayman, says Zimmerman is seeking damages for being "wrongly convicted" based on false evidence and false testimony from Rachel Jeantel.

Jeantel, who was sometimes characterized as Martin's girlfriend during the trial, was on the phone with Martin, who was 17 years old at the time, in the moments before he was shot to death by Zimmerman, then 28, outside the Retreat at Twin Lakes gated community. Naturally, she was a key witness for the prosecution.

The Miami native, a 19-year-old high school senior when the shooting took place, was inconsistent on the stand during Zimmerman's trial. Jeantel's demeanor oscillated between bullish defiance and subdued exasperation. Her factual testimony suffered from apparent discrepancies, like when she admitted she didn't write a letter to Martin's mother but asked a friend to write it, along with questions about why she signed the letter "Diamond Eugene."

When Zimmerman walked free after his murder trial, Jeantel partly blamed herself. It was clear her testimony had the potential to convict Zimmerman, which is why her second day on the stand was nationally televised.

Now, Zimmerman says that testimony was false, and that Jeantel is an imposter who lied about being on the phone with Martin before he died.

Zimmerman's lawsuit says that Jenteal lied in order to force the case back open after Sanford Police initially closed it on the basis of self-defense, and that, according to "research" detailed in the documentary "The Trayvon Hoax: Unmasking the Witness Fraud that Divided America" by director Joel Gilbert, Jeantel was never Martin's girlfriend.
More "research" from the movie, in the form of cell phone records, purportedly shows Martin's real girlfriend was someone named Britney Diamond Eugene, whom they allege had refused to lie on the stand.

According to Zimmerman's suit, Eugene was switched out with Jeantel, who they say lied to law enforcement officers and again on the stand. The suit alleges that Martin's mother, Sybrina Fulton, and Martin family attorney Benjamin Crump all knew about it, along with state prosecutors Bernie de la Rionda, John Guy and Angela Corey. Zimmerman feels he is entitled to one-tenth of a billion dollars to make up for it.

Zimmerman will be giving a press conference on Thursday, Dec. 5, at the Coral Gables Art Cinema, followed by a screening of the documentary and presentation of the filmmaker's "research."