Florida wins big in annual 'U.S. News' cruise rankings, just as it mourns one of its biggest advocates

Seventeen cruise lines and 176 ships were included in this year’s list, which is based on passenger rankings, sanitation-inspection scores, and expert ratings based on facilities, activities, cuisine, cabins and more. The cruise line rankings are a relatively objective look at an industry where brand names often overshadow value and new offerings.

In the Best Cruise Line in the Mediterranean category, Seabourn Cruise Line remained in the top spot, but they were bumped to second place for Best Luxury Cruise Line, with Viking Ocean Cruises claiming first place. Viking kept their first-place ranking for Best Cruise Lines for Couples.

One of the biggest moves across the six categories was Crystal Cruises in the Best Cruise Line in the Mediterranean category. It jumped from fifth place last year to second place this year. Crystal Cruises also moved up from fourth place to third in the Best Cruise Line for Couples. In both categories, Crystal unseated Azamara Club Cruises, which slipped to fourth position in both groups.

Royal Caribbean’s and Florida’s numerous awards are especially meaningful as the industry mourns the passing of Edwin W. Stephan, who passed away on Friday at the age of 87. Stephan, a war veteran with two Bronze Stars, is known as "the founding father of the modern-day cruise industry" and is credited with bringing the cruise industry to Florida.

Stephan founded Royal Caribbean in 1969, a year later launching Song of Norway, the first cruise ship purpose-built for warm-water cruising. His vision of Caribbean cruises was quickly modeled by other cruise lines, including Carnival, which launched in 1972. The two competing cruise lines, both of which continue to operate out of South Florida, have grown to be the two largest cruise companies in the world. 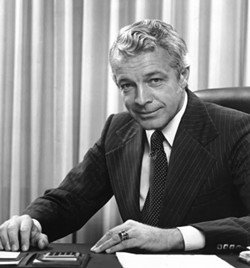 Under Stephan’s leadership, Royal Caribbean remained a groundbreaking company within the industry thanks to such concepts as cantilevered Viking Crown Lounges and the multi-deck atriums that have since become industry standards. In 1978, Song of Norway was also the first major cruise ship to be stretched by inserting an additional mid-section. He was one of Miami’s biggest cheerleaders, regularly praising its warm weather and beautiful beaches.

Stephan worked his way up within the hospitality industry, beginning as a bell captain in Miami Beach. He remained in leadership at Royal Caribbean until his retirement in 2003 and was a regular in South Florida philanthropy circles. As witnessed in these latest awards, Stephan’s impact on the industry is still seen to this day.