The City of Orlando posted a photo of their new crosswalk artwork in Thornton Park on Friday, and it's really something. 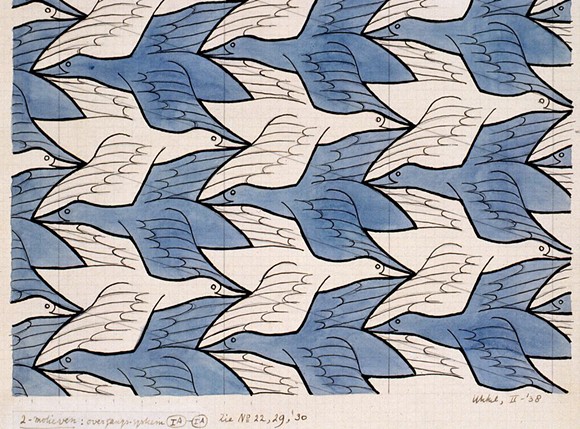 It's pretty damn cool to look at, but is it a safe addition to an already slightly confusing intersection?

This is, after all, East Washington Street and Summerlin Ave., an intersection with stop signs on one street and not on the other. Drivers without a stop sign often hesitate, or even stop, out of caution at the crosswalk. Graffiti Junktion diners on the patio can watch the awkward interactions between pedestrians and drivers all day.

It will be interesting to see how the new crosswalk, which also brings to mind the Dazzle camouflage designs of early-century Navy ships, affects pedestrian safety.

The crosswalk art could raise awareness of pedestrians, and cause drivers to take a second look. Some cities have created 3-D versions of crosswalk stripes by adding painted shadows to existing white stripes, as a way to increase visibility and promote cautious driving.

Still, the safety issue is a fair question to ask, especially when rates of pedestrian deaths nationally are the highest in almost three decades, and Orlando's roads are the most dangerous in the country for pedestrians.

The federal government has been reaching out to cities that install creative crosswalks, including in one instance reported by the New York Times, when members of the Ames, Iowa, city council installed a rainbow crosswalk ahead of an annual LGBTQ festival. About a week after the ribbon-cutting ceremony, a letter from the Federal Highway Administration arrived asking them to remove it. The Ames council basically ignored the letter, and the feds haven't fined the city or forced them to repaint the crosswalks. The same happened last week, when the city of Atlanta received a similar letter.

In 2013, says the Times report, the highway administration issued a memorandum affirming that "crosswalk art is actually contrary to the goal of increased safety and most likely could be a contributing factor to a false sense of security for both motorists and pedestrians." The agency responded to requests for evidence that colorful crosswalks have an impact on safety, but they were unable to provide anything to back it up.

Orlando also installed a rainbow sidewalk in 2017, resulting from an online petition, to commemorate the lives lost and changed by the Pulse attack. The crosswalk on West Esther Street at Orange Avenue received an overwhelmingly positive response, despite not exactly conforming to federal guidelines. As far as we know, the federal authorities have not weighed in.

The sternly worded, if toothless, letters from federal highway authorities were enough for the city of St. Louis to let its painted crosswalks fade over time, fearing the potential loss of federal highway funds.

In a blog post responding to the St. Louis decision, the Rice University Institute for Urban Research says the furor over artistic crosswalks misses a broader point about safety.

"If we’re relying exclusively on white paint to protect pedestrians from a moving ton of steel, we’ve failed," said the author. "The FHWA and cities should spend more time considering how to make crosswalks into safer spaces by more appropriately dealing with the sections of street leading up to them."

"If we’re relying exclusively on white paint to protect pedestrians from a moving ton of steel, we’ve failed." tweet this
The Rice University editorial advocates for a pedestrian-centric approach to street design and safety, saying, "by the time a car gets to the crosswalk, the driver should have already been told by a variety of other markers — lower speed limits, narrower roadways, flashing pedestrians lights, street design elements such as bulb curbs or midblock islands."

The impasse between local and federal authorities – and the need for more widespread use of safety devices – means the decision of whether we have nice things is ultimately up to Orlando drivers.

Are we able to slow down and abide by attractive, unique crosswalks that add character and meaningful color to our neighborhoods, or will we plow ahead, carelessly counting on pedestrians to protect their own necks?

The intersection at Summerlin and East Washington is worth checking out. Make sure you look both ways.