As Disney World's Skyliner reopens today, the company keeps the cause of the failure under wraps 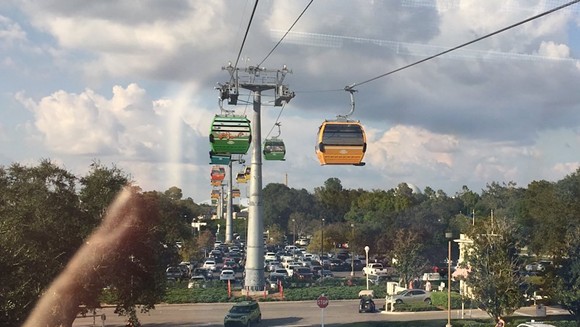 Disney’s brand new Skyliner gondola ride reopened this morning, after the system broke down on Oct. 5 and trapped dozens of guests in the air for hours.

The Disney Parks Blog posted the news early this morning, saying the system is now operational from 8 a.m. to 10:30 p.m.

Videos on Twitter revealed it was more than just a glitch. One of the gondolas crashed into other cabins over a week ago, leaving behind a pile of broken glass and completely backing up the aerial transportation system.


Check out some footage of the #gondola that crashed together in the #Riviera Resort station. Glass can be seen on the ground. FOLLOW US FOR THE LATEST #Disney #DisneyParks #WaltDisneyWorld
pic.twitter.com/CeP0JLP7wO

This amusement park malfunction made national news headlines, but Orlando Sentinel reported that up to three people were hospitalized, seeking medical attention during the incident.

Six cabins had to be individually evacuated by the Reedy Creek Fire Department, Disney’s emergency service, according to Click Orlando.

Here's the scene at the #DisneySkyliner evacuation near Disney's Boardwalk Resort. The finale of Epcot Forever can be seen nearby

Some guests claimed to be stuck in their cabins for up to four hours, taking pictures and videos to share the not-so-thrilling experience online.

So today Disney opened their sky liner gondola, so naturally my dad took off work so he and my mom could go ride it (Disney fam, amiright?) This is the text I got. pic.twitter.com/BaKcVKmKhl

Although Disney hasn’t announced the exact cause of the disturbance, the company says safety is their priority, and resumed operation without guests on board.

“Following a complete review with the manufacturer, we’ve made adjustments to our processes and training, and we are improving how we communicate with guests during their flight with Disney Skyliner,” according to Thomas Smith, Disney’s editorial content director.

Union representatives for firefighters with the Reedy Creek Fire Department have said recently they are concerned about the lack of personnel to handle multiple crises at the parks, should they occur.

"Disney's doing a great job of expanding their infrastructure with hotels and parks and things like that, but we feel like the Reedy Creek Improvement District is not keeping up with the public safety aspect of increasing firefighters on the ground," Aaron Colburn of the Reedy Creek Firefighters Local 2117, told WKMG.