The Bahamas Press, a tabloid on the islands, is reporting "thousands of corpses" are being buried on the Abaco Islands, as authorities and residents continue recovery efforts.


BP BREAKING| On Abaco, the recovery of bodies that were left in the heat for more than eight days has begun. Thousands of corpses are being buried. #dorian #Abaco #Bahamas #hurricane | by Bahamas Press pic.twitter.com/RCB6Up7t78

According to their report, "the bodies were scattered all along the corridors of the communities affected by Hurricane Dorian," with many of the remains being of Haitian nationals who lived there. "According to clinicians," it continues, "that number in Abaco alone is around 3,000 following the deadly storm."

That number far exceeds the previously reported number of deaths, initially at 20, then 44, and now 50 reported on Sept. 10.

But, as many on social media are pointing out, The Bahamas Press is a tabloid, so the statements should be viewed with some skepticism.


For my foreign friends on the TL, Bahamas Press is like the TMZ of the Bahamas, just FYI. Definitely some truth but more so reporting done for propaganda purposes. I always try to check other Bahamian news and also Intl news before I believe one of their reports.

Still, the Miami Herald has reported that authorities on the islands considered counting bodies "not the priority," focusing their efforts instead on initial rescue efforts and identifying those found first.

People are sharing news of the death toll rising in the Bahamas, from personal social media accounts and media from reporters like Vic Micolucci of WJXT, who met one man who said "there are at least 1,000 people dead on my island."

“I saw 80 bodies, there are at least 1,000 people dead on my island,” says Steven from Abaco. He lost his home, waited 3 days to be airlifted to Nassau. @wjxt4 pic.twitter.com/9KpIPu08EN

President Donald Trump announced on Monday he would not allow people from the Bahamas to come to the United States, unless they have "totally proper documentation," according to Newsweek, despite the fact that many of those needing passage have lost all of their documents and possessions. 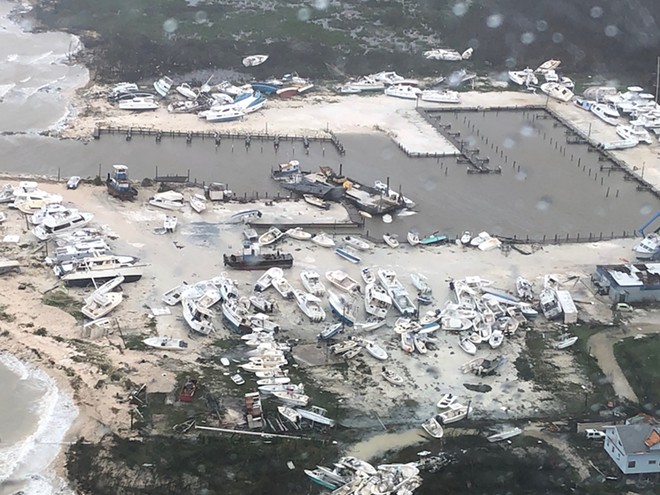 Related Updated: How Central Floridians can help our neighbors in the Bahamas

Updated: How Central Floridians can help our neighbors in the Bahamas
By Dave Plotkin
Blogs
State legislators are collaborating to aid recovery efforts from Florida. Rep. Shevrin Jones, a Democrat who has family in the Bahamas, is organizing supply drives from his Broward County district. Jones is advocating for the reversal of new immigration restrictions on Bahamian evacuees.


With it already being difficult for Bahamians to get from Freeport to Nassau, the US Government just made it even harder. US states that: pic.twitter.com/BKtV470C03


Huge THANK YOU to @Allegiant they have donated an ✈️ Air Bus 319 to fly supplies to #BahamaStrong https://t.co/dXDKWfnxVX

Central Floridians can contribute to the relief effort by donating and volunteering through a number of organizations.