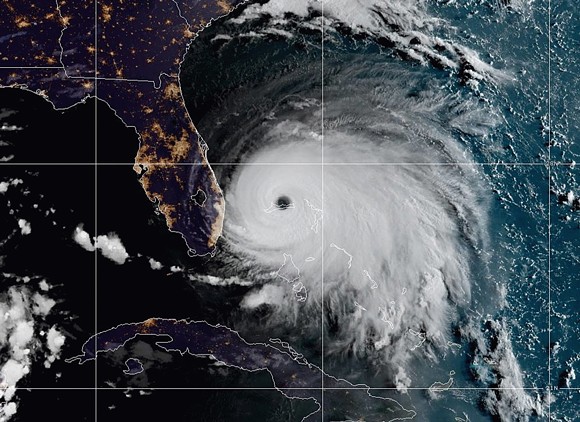 Hurricane Dorian continues to inch westward toward Florida at 1 mph, ravaging the Bahamas, as its movement and winds slowed only slightly overnight.

Ata a 10 a.m. press conference, Gov. Ron DeSantis advised Floridians to prepare while they still can, and noted that 72 nursing homes and assisted living facilities have been evacuated.

With sustained winds of 165 mpg and gusts measured at 220 mph, the hurricane remains a Category 5 monster storm, the strongest measured anywhere on Earth this year. The 8 a.m. NOAA advisory indicates the storm has essentially stopped moving in place.

On Sunday, the storm had grown to 185 mph sustained winds with 220 mph gusts, before making three landfalls in the Bahamas. It is already responsible for at least one death, with several people missing, according to accounts from the islands on social media and in the Bahamas Press.

One particularly chilling video filmed by a mother in Abaco Islands and shared by a Bahamian events promoter shows the destruction and danger of the flooding there.

The Guardian is reporting at least 13,000 homes destroyed or severely damaged. CNN is reporting the Grand Bahama Airport is under 5 feet of water, and entire islands may be submerged. Another video from the same account shows cars and homes completely submerged.


#HurricaneDorian beating up my Freeport,Bahamas 🇧🇸😢😪 The wind and rain is nothing we have ever seen before! Cars, homes total loss #Dorian2019 #flooded #PrayForTheBahamas pic.twitter.com/nwMIJHcRvX

While forecasts over the past several days have expected Dorian to begin moving north and later east, drenching the coasts of Florida, Georgia, and South Carolina, the storm's current 1 mph crawl westward across the Bahamas has inland Central Floridians considering the effects of a direct hit.

Orange County can expect winds 35-45 mph with 2 to 3 inches of rainfall, enough to bring down trees and cut power. If Dorian does not take the expected northern route, the effects could worsen. Orlando remains in the "cone of uncertainty" for the eye's path.

Brevard County emergency officials are now calling for evacuations to begin at 8 a.m. Monday, for people order for people living in the barrier islands, low-lying and flood-prone areas, mobile homes, and people with disabilities.

Volusia County will begin mandatory evacuations for certain areas at 10 a.m. on Monday. Residents on the beachside, in low-lying areas, and in RVs and mobile homes throughout Volusia should plan to relocate.


In glancing through social media, so many people are asking "Where is the turn North"? Dorian is doing exactly as expected. It will pretty much stay put until tomorrow when the move North should begin. It then picks up its forward speed as well.

Hurricane Wilma, by comparison to Dorian, was considered the most intense tropical Atlantic cyclone ever recorded, reaching wind speeds of 185 mph in 2005. Dorian is currently tied with 2004's Hurricane Ivan as the ninth-most-powerful Atlantic hurricane ever by pressure, according to the Mesoscale Analysis of minimum sea level pressure (MSLP).

Central Floridians are advised to prepare for the worst, even as predictions have Dorian likely to move northward early Tuesday. A turn westward would leave little to no time for additional preparation.