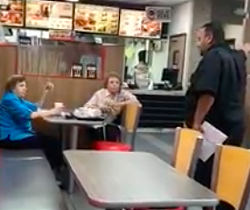 The manager of a Burger King restaurant in Eustis was told to "go back to Mexico" for speaking Spanish, an incident caught on a video and now spreading across Facebook.

The video, originally posted last week by Neyzha Nicole and Oni Martinez, identified the manager as Ricardo Castillo. He can be seen speaking to two middle-aged women, who accost him for speaking Spanish, while customers eating at a nearby table record the argument.

The five-minute video shows a back-and-forth between the women and the manager, who calls them "prejudiced" and orders them out of the restaurant.

"You're in America, you should speak American English," one of the women tells the manager. As the argument heats up, one woman says "go back to Mexico if you want to keep speaking Spanish."

"Guess what ma'm. I'm not Mexican," he replied. "I'm not Mexican but you're being very prejudiced and I want you out of my restaurant right now."

At one point, the manager threatens to call the police if they don't leave, and informs the women that the owner of the local franchise is Cuban ("Well, that's fine, he speaks English then," one lady says) and speaks Spanish.

The original video was shared more than 100,000 times on Facebook. Comments on the video range from, "The old ladies were right...." to "There is no place for discrimination. Ladies OUT!"