When Wally's Mills Avenue Liquors closed in August of last year, speculation over its future resulted in some impassioned debates. Orlando superattorney John Morgan alluded to an attempt to save the business, though that plan never came to fruition. Since news of the property being purchased by Minesh Patel and redesigned by Reid Pasternack broke, speculation has been rampant about whether or not the new Wally's would be able to maintain the grungy charm of the original.

Since we tend to give businesses a decent amount of time to work out the bugs in running a bar or restaurant before giving them a full review, this shouldn't be seen as our final word on the resurrected Wally's, but instead a collection of our first thoughts and impressions upon visiting during its grand reopening.

We stopped in to the grand opening of the newly redesigned Wally's last night to give it a look. Predictably, the bar was packed. Much of the interior has been gutted to open up the space, including the wall of coolers that used to separate the barroom from the liquor store side. The increase in elbow room didn't make it any easier to get a drink, though. A couple nearby claimed that they had to wait 20 minutes to get served earlier in the evening, while we overheard another woman compare the chaotic scene to one of John Taffer's "stress tests" on the reality show Bar Rescue.

We ordered a PBR since it seemed like it would be the easiest thing for the bartender to grab, but the bartender told us that they didn't serve Pabst. We had to literally point to the PBR tall-boys in the under-counter beer cooler to convince her otherwise. (A Peeber cost $3 last night, by the way. Not bad.) The staff can't be faulted too much, however, as they were all new and still getting used to inventory, recipes, and networked touchscreen POS kiosks. That's right: You no longer have to remember to bring cash to Wally's — though it did seem to help speed transactions along if you used foldin' money.

If the naked-lady wallpaper of the original Wally's Mills Avenue Liquors was your favorite thing about the bar, you're in luck. Pasternack was able to save much of the crumbling wall covering. But the new management, working with marketing firm Orange Plane Creative, seems to have adopted the wallpaper as the central marketing theme for this new incarnation. Over near the bathrooms hangs a framed picture of the wallpaper, with a PBR, shot of whiskey, and a lit cigarette in an ashtray in the foreground. Considering the fact that the new bar is non-smoking and the difficulty we had ordering a PBR earlier, we got the strong impression that we were standing in a Wally's-themed bar rather than a spruced-up version of the old Wally's.

And don't get us started on how questionable a move it was to move the condom dispensers out into the main room and display them as art. (Your mileage may vary, but this reporter was grossed out thinking about turning avenues for safer sex into a joke.)

You can already buy a new T-shirt or trucker cap from the retail counter, of course. The slogan on the T-shirts has the Wally's script logo along with the slogan "Where the drinks are stiff and the wallpaper is naked." By the way, you'll have to pay extra to get a classic "Wally's pour" now. But how 'bout that wallpaper, right?

The ashes of namesake Wally Updike, who died in 2008, are preserved in an alcove in the bar area. It's a nice touch, and evidence that the while there may be some decisions we find problematic with the new version of Wally's, there's plenty of consideration being made toward the history of the bar. Frustratingly, however, that alcove is right above the spot where the jukebox used to be. Can't win 'em all, we suppose. 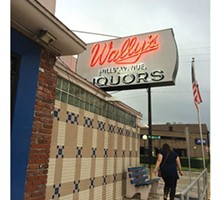