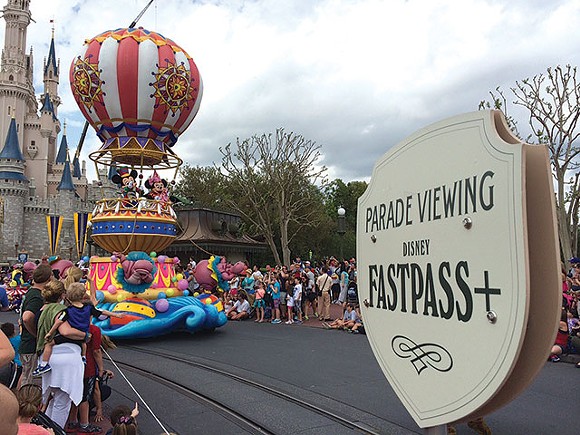 Hollywood Studios will see a major shift in its FastPass+ tiers this fall, but even more significant changes might be on the horizon for the WDW reservation system.

Currently, all guests at WDW theme parks have access to three FastPass+ attraction reservations ahead of their visit. On the day of, after those three are used or their time slot has passed, guests can then make more reservations, one at a time, throughout the day. The service is linked via
click to enlarge

RFID-equipped tickets or MagicBands. The My Disney Experience mobile app allows guests to change their reservations and make extra ones once their three are used. Access to the online ride reservation system opens 60 days ahead of their visit for those staying onsite or at select resorts and 30 days for those staying offsite.

Numerous pilot programs have offered extra FastPasses or other FastPass-like reservations, typically for live shows, as part of upcharge offerings. Disney has also rolled out upcharge FastPass programs at other Disney resorts. Most Disney resorts still use paper FastPasses, known within the fan community as ‘Legacy FastPass,’ that don’t offer ahead-of-visit reservations. These systems require a guest to be within the park itself before they can make their ride reservations. Both Disneyland Paris and Disneyland in Anaheim, the only two other resorts that the Disney company wholly owns, have also begun offering paid FastPass options within the last few years.

The two resorts offer slightly different variations of the paid FastPass program. In Paris, guests can purchase various FastPass programs that each have a preset list of popular attractions on it. Most of these provide a one-time “Speedy Access” to select rides beginning at €30 per person for three attractions. An unlimited option for all available attractions begins at €120 per person per day. The upgrade options are only available on select days and are limited in number. The price, availability, and other features adjust according to expected crowd size at the park, somewhat similar to Universal Orlando’s Express Pass system.

At Disneyland in California, a paid system was introduced in 2017. The mobile app-based program, known as MaxPass, allows guests to make FastPass reservations without having to visit the individual FastPass kiosks. It also includes unlimited Disney PhotoPass photo downloads from the day. For $15 per person per day, the service has proven extremely popular with many guests. MaxPass is included with select annual passes and is available as a yearly add-on purchase for $100 for those annual passes which don’t include it.

Disney World spent an estimated $1 billion to upgrade every single attraction, cash register, hotel room door, and turnstile into a single system linked via the RFID MagicBands and mobile app. Now, six years after its initial rollout, many of the early plans announced for the program have still yet to be fully realized. But that hasn’t stopped other cost-cutting initiatives thanks to the system, including the use of automatic photographer machines instead of human photographers at select character meet-and-greets. Despite, or thanks to, these limited successes, the program is widely viewed as a flop, and nearly every executive involved in the creation of it is no longer at the company.

On the user side, many guests have complained that the Disney World system requires months of planning ahead of their visit and causes longer lines. On Disney World’s own website, it tells guests to “Make a Dash for FastPass+” in what seems to be an acknowledgment of how quickly popular attractions fill up with the current system, even two months out. It now looks like Disney leadership has decided to bite the bullet and fix the countless piecemeal updates while also attempting to better harness profits out of the boondoggle of a system that is already proving out of date.

Rumors point to Disney World readying for one of the largest shifts in the FastPass+ program since its debut in 2013. The updated system would be like that of Disneyland Paris, with paid options that don’t require any pre-visit planning. There are already similar offerings available as part of the Enchanting Extras Collection, including the Ultimate Disney Classics VIP Tour, the Ultimate Day of Thrills VIP Tour, and the Star Wars Guided Tour. These tours range in price from $92.95 to $349 and all include group tour guides.

According to multiple insiders, including publicly by Martin on the WDWMagic forums, the free FastPass+ program used today will still be available after the paid version is introduced, though some rides may see their number of free FastPasses decreased to provide availability for the upcharge options. Disney seems to be hoping that guests will use a mix of both paid FastPasses, likely for more popular attractions, and the three free ones that come with regular admission, though these may have to be used on shows and other large-capacity attractions thanks to availability. Both single park and park hopper options for the paid versions will be eventually available at WDW, with individual park options expected to debut first.

The two-tiered system that some WDW theme parks currently use would officially be scrapped, but the reservation app may ensure that multiple attractions in what is currently Tier One wouldn’t be available at the same time, essentially keeping the tiers in place unofficially. Many of the specifics of the updated program, including those around the current tier system and the possibility of also including snack or meal credits with certain offerings, still seem to be very much in flux. The cost of the new paid system is also unclear but, like the Paris version, it should use crowd calendar-based demand pricing. Discounts with select on-site accommodations may also be used, similar to how Disney World currently uses the credit-based Disney Dining Plan.

The ultimate goal of the new upcharge system is to provide a single FastPass branded program across all fully owned Disney resorts, with the aim of lessening confusion between the three resorts, though that is still many years away.

The rumored WDW paid FastPass program is expected to debut ahead of the 50th Anniversary celebration that begins in 2021.