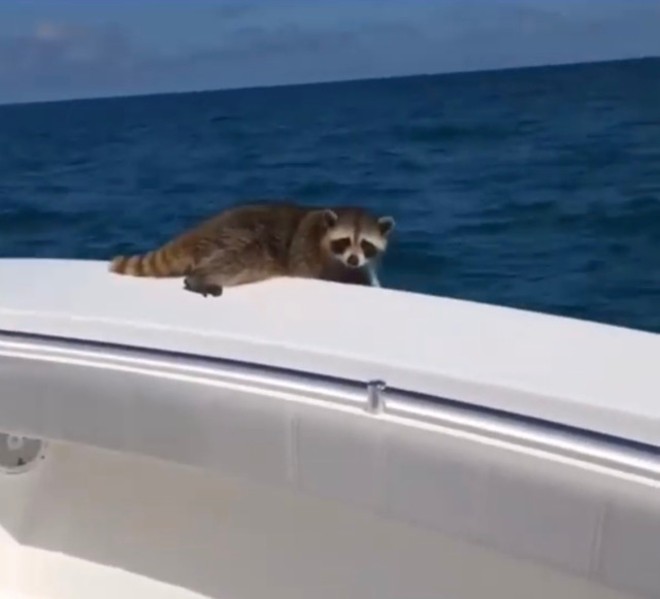 Another Florida man is in trouble for putting an innocent creature in danger. This time, it's a Clearwater lawyer Thomas Cope.

A recent video posted to social media by Thomas Cope, shows a man (presumably Cope), shooing a raccoon off of his boat — 20 miles offshore. Now, the lawyer is under investigation by the Florida Fish and Wildlife Conservation Commission, and he wants to apologize.

The video is captioned, "'Trash panda came out from hiding 20 miles from dock! Anyone else had these things squat on their boat? *watch muted if you don't like profanity.*" Throughout the video, the man recording is yelling at the raccoon while the animal is searching for an escape.

"Get off my fucking boat! What the fuck is wrong with you?"

"We're just going to have to push him off."

Once the raccoon falls off the boat, the video continues, showing the raccoon paddling around.

"Put it in gear," the man says to another on the boat.

Followed by, "So long, sucker!”

The video has since been copied and passed around social media

In a recent statement, Cope apologized for his actions and wished there was some way he could have returned the animal to safely to shore.

"Knowing raccoons can be rabid and unpredictable, the only realistic option we could think of in the moment was to get the raccoon off the boat."

The Florida Fish and Wildlife Conservation Commission was made aware of the video on May 8 and made a recent statement to ABC Action News.

"It is still too early to speculate as to what violations took place in this incident. However, the FWC would like to state that we believe these vile acts of animal cruelty have no place in our state or anywhere else."