Band of the Week: Jordan Foley & the Wheelhouse 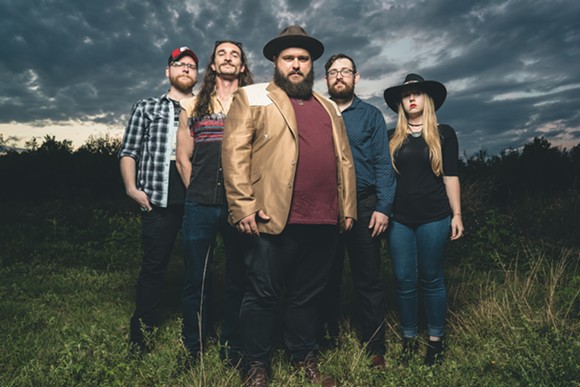 Welcome to Orlando Weekly's "Band of the Week." Every week, we highlight one of our favorite local bands. This week, we're pleased to bring you Jordan Foley & the Wheelhouse.

Jordan Foley is playing Thursday, March 14 at Will's Pub with Matt Woods and Christina Wagner. Jordan Foley & the Wheelhouse are playing March 21 at the Falcon with Beemo and the 502’s and March 30 at Washburn Imports - Orlando with Nicholas Roberts.

When did the band form?
I've been flying solo with my music for about six years, playing at venues and in lineups all over the Central Florida area. Then in the last two years, I started venturing out to play with other artists. I formed a duo with my friend Sara Underhill, and we called ourselves Parlor. Then I met Tanner Johnson, and we started playing shows together pretty frequently in Orlando. Ultimately, Jordan Foley & The Wheelhouse formed when I had my album release show at The Imperial at Washburn Imports last April. It was the first show I had ever played with a full backing band, and the players ended up playing in multiple shows with me shortly thereafter.

Who's in the band?
In a short year, The Wheelhouse has already seen its share of various musicians in and out of the band since its initial formation. I started out with friends of mine filling in and we’d play a show with whoever's available. Within the last couple months, things started falling into place and we now have our official lineup of members:

Currently available releases:
My album Give to Get a Day is available on all music streaming services. Here’s the Spotify link!

What has been your most memorable show so far?
As a band, our most memorable show was Folk Yeah 2019 last November at Will's Pub. We had a great turnout and really enjoyed jamming together in such an amazing lineup. The year prior at Folk Yeah, I played a solo set and vowed that the following year would be with a band, and it happened!

Playing solo, I had the opportunity on February 5 of this year to open for one of my heroes BJ Barham, leader of American Aquarium. I’ve been a huge fan of their music for years, and it was such an amazing experience getting to play for fellow American Aquarium fans!

Which local band is your favorite one to play a show with?
I'd have to say Luke Wagner & The 441. Luke is a good friend of mine, and his band knows how to bring it. Luke knows exactly how to put on an exciting show and has a stage presence that makes the crowds take notice. He’s also a very skilled songwriter, and I admire his music greatly. We are very supportive of each other both on and off the stage, and our friendship has grown through having played so many shows together in the last couple years.

What description gets used for your band that you would most
like to correct people on? Why?
The description of being a country artist tends to get used frequently. While there are definite and obvious influences from country music (especially older country music, or alt-country), there are multiple layers to our sound that I think make it Americana overall. As a singer-songwriter, I provide a soulful yet acoustic folk nature to the sound, and the band fills the space of the songs that creates the Americana umbrella bringing blues, rock, folk, and even a little bluegrass, into the fold. Americana in my eyes is all-encompassing, so you can hopefully find anything that catches your ear that keeps you listening.

What's your favorite thing about being an Orlando band? What's your least favorite? Why?
My favorite thing about being an Orlando band is honestly being a part of the music community. For years when I was just starting to play shows in town, I looked on as an outsider and in due time, I became a part of the crowd. Once that happened, I felt connected to the city and the people here in town. It’s great seeing bands and artists represent each other with support at shows. Whether we share a bill or show up at each other's gigs, it’s always so heartfelt to see the support take place.

My least favorite thing would just be the weather from time to time. Whether it's 100 degrees outside on a hot summer day or there's a storm rolling through, the weather doesn’t always make our shows easy, but we pull through because we love it so much!

Any big news to share?
This year is gearing up to be a big one as we have shows scheduled all over town, both as a band and as a solo act. I'll be looking to expand to other cities and towns and am looking to start touring within this year and the next. In terms of new music, I plan on getting back in the studio in May to record a little solo acoustic project before starting work on a full-length album next year! I am also looking to play more house concerts/listening room-style shows, so please feel free to contact me to book a date if you'd like to have me or the whole band come over to your house and play a show for you and your friends!