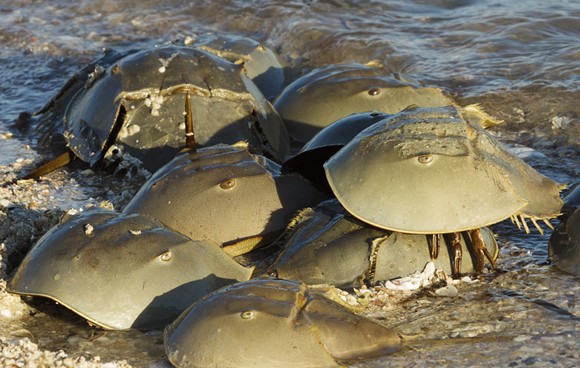 Horseshoe crabs will be slappin' shells on Florida beaches this spring, and state wildlife officials want all the explicit evidence you can get.

"Although horseshoe crabs have existed for about 450 million years, little is known about Florida populations," the FWC says in a statement. "Public sighting information helps FWC researchers target spawning beaches for the Florida Horseshoe Crab Watch Program, a citizen science initiative to collect scientifically accurate data throughout the state."

To identify a pair of horseshoe crabs going at it, look for a smaller male on top of a larger female. The best time to spot these shameless sexcapades is around high tide, within three days of a new or full moon. The next opportunity is during the new moon on Wednesday, March 6.

If you see horseshoe crabs that got a little too freaky and are on their backs, gently pick them up and flip them back over holding both sides of the shell. After turning the crab over, release it back into the water.

"Simple actions like this help conserve this species and the many other species that depend on it," wildlife officials say.

You can report all the horseshoe crab spawning you witness with this online survey, by emailing [email protected] or by calling
1-866-252-9326.