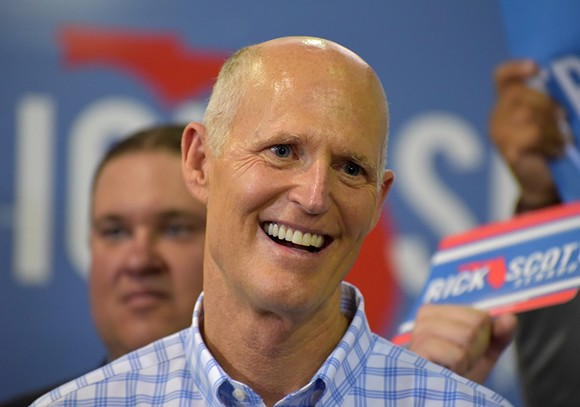 Florida Sen. Rick Scott, a sentient diaper that routinely advocates for "the rule of law" and denounces authoritarians, is now praising President Donald Trump for his decision to commit arguably the most authoritarian act in modern American history.

This morning, Trump declared a national emergency over the nonexistent crisis at the country's southern border, a declaration that ignores the fact that undocumented border crossings into this country are at a 20-year low, immigrants statistically commit less crimes than non-immigrants, and in 2017 we captured exactly 6 terrorist suspects at the border, not the nearly 4,000 that Trump previously claimed. Not to mention that Trump's wall will do absolutely nothing to address our nation's drug epidemic.

But none of this seems to bother Scott, who on Friday released a statement applauding the president for attempting to fulfill his completely half-baked campaign promise by subverting Congress and unconstitutionally setting a precedent for future power abuse.

"I applaud @POTUS' decision to put the safety of our country first and use his authority to secure our border" said Scott in a tweet. "I traveled to the border last week and saw firsthand the dangers the border patrol men & women face every day as they work to keep Americans safe."

I applaud @POTUS' decision to put the safety of our country first and use his authority to secure our border.

I traveled to the border last week and saw firsthand the dangers the border patrol men & women face every day as they work to keep Americans safe.

Oddly, nowhere in Scott's statement does he question why the president declared a national emergency today, rather than before the December government shutdown, or even two years ago when Trump took office.

Then again, Scott absolutely loves this shit and has never been one to get upset about democracy taking one in the jeans. After all, he once violated federal law by executing a mass voter purge, he vehemently fought against restoring voting rights to former felons, and just this week he filed a bill that essentially makes it so only millionaires can run for Congress.

Meanwhile, Trump's dealing with his very real "national emergency" by golfing at Mar-a-Lago.