Almost half of Central Florida households struggle to cover their basic needs, according to a new report released this week by the United Way.

Despite Florida's GDP valued at $1 trillion and an improving economy, 47 percent of households in Orange County, about 220,203, struggled to afford child care, housing, food, health care and transportation costs in 2016. In Osceola County, 57 percent of families, an estimated 55,614 households, earned less than the basic cost of living.

About 44 percent of households in Lake County, nearly 56,711 families, were listed as financially insecure. Seminole County fared slightly better with only 39 percent of families, or about 65,344 households, who struggled to cover basic costs.

"In a robust economy with less than 3 percent unemployment in Central Florida, the number of households at or below the ALICE threshold continue to increase," says Heart of Florida United Way President and CEO Jeff Hayward in a statement. "It is time that we ask ourselves what needs to be done as a community to help ALICE families improve their quality of life."

Central Florida's rate of struggling households mirrors the statewide rate of families who don't have enough money to make ends meet – about 46 percent or more than 3.48 million families.

The results aren't surprising when you consider that 67 percent of jobs in Florida pay less than $20 per hour, which is an annual salary of about $41,600. But the average "household survival budget" in Florida requires a family of four to earn at least $55,164 to stay afloat, according to the report.

Moreover, the report notes that Florida's greatest job gains were in occupations that paid between $9.17 and $14.06 per hour.

"A full-time job that pays $15 per hour grosses $30,000 per year, which is just over half of the Household Survival Budget for a family of four in Florida," the report says. "Despite the growth in jobs, it has become more challenging for Florida workers to find jobs with wages that can support even a basic household budget."

The report's average survival budget in Florida lists housing costs for a single person at $617, which is slightly laughable considering Orlando's affordable housing crisis. Average rents in Orlando increased to $1,472 in November, slightly above the median U.S. rent of $1,449, according to Zillow.

Renters in Orlando need to earn at least $16.33 an hour ($33,960 a year) just to afford a studio apartment and not be rent burdened, a 2018 report from the National Low Income Housing Coalition says. The Heart of Florida United Way has household survival budgets for Orange, Osceola and Seminole Counties. The monthly housing cost for a single adult in Orange County is listed at $748. 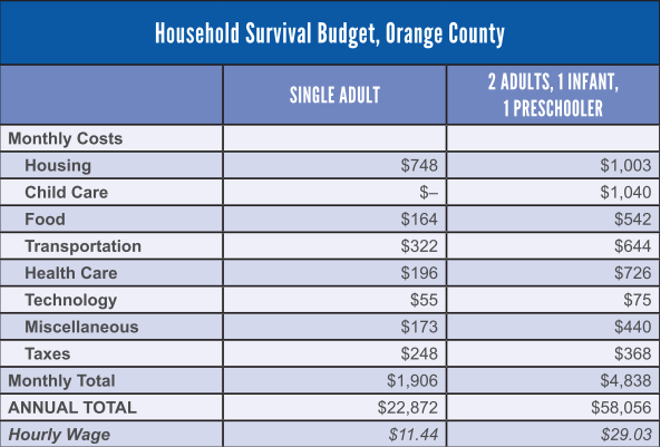 "We need to take action and determine how we can address the challenges and work together as a community in order to improve the health, education and financial stability of those living at or below the ALICE threshold," Hayward says. "A solution will involve continuous collaboration by businesses, non-profits and government agencies."