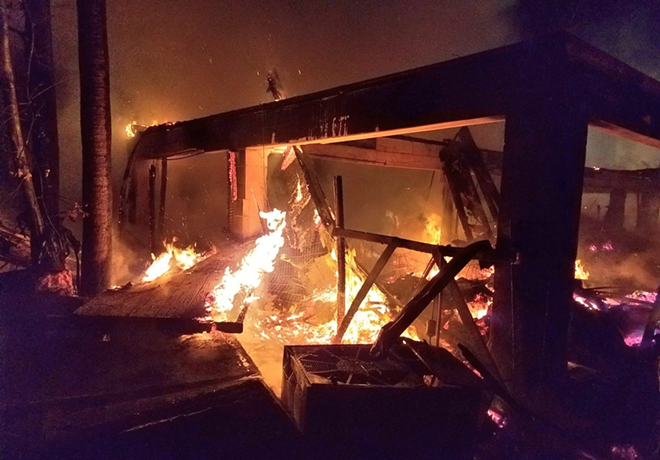 Dozens of animals were killed early Monday morning in a large fire that destroyed the Second Chance Wildlife Sanctuary in east Orange County.

Orange County Fire Rescue responded around 1:30 a.m. to a fully involved fire at the two-story home on 805 Baron Road near Bithlo. The sanctuary was home to "exotic and abandoned wildlife that for whatever reasons cannot be released into the wild, according to its website. From 300 to 350 animals were housed on the 2.5-acre property.

The owner, Jim Bronzo, was sleeping in the upstairs bedroom when he was woken up by loud crowing from his estimated 80 peacocks, OCFR says. As neighbors called 911, Bronzo tried to save his animals from the fire. He was able to rescue a few of the animals inside, including Yoshi, the only one of four dogs who survived.

OCFR spokesperson Michael Jachles says numerous animals are presumed dead, including four 300-pound tortoises, three dogs, four iguanas, three sugar gliders, a boa constrictor, a carpet python, a ball python, two parrots and four ducks nesting on the first level of the home. A baby raccoon once thought to be dead is reportedly alive. Out of five cats, one survived and the whereabouts of the others are currently unknown. Jachles says it's possible the owner may have found more dead animals since OCFR responded to the fire this morning.

#Update #workingfire Baron Rd. Fire is out at this time, numerous animals perished in the fire. The homeowner was sleeping in the upstairs bedroom when he was awakened by his peacocks. He was able to save a few of the animals that were inside. pic.twitter.com/xxAxR12Q64

#PHOTOS Baron Rd #workingfire neighbors called 911 as the homeowner, and @WildlifeOrlando founder, tried to save his animals. Yoshi was the only one of four dogs to make it out. pic.twitter.com/R61AVPNPCi


Orange County firefighters put out the blaze shortly after 3 a.m. The Florida Bureau of Fire and Arson Investigations will determine the cause and origin of the fire that consumed the wildlife sanctuary, OCFR says.

The Orlando Sentinel recently wrote a story about the sanctuary and Bronzo's feud with his neighbor over loud gunshots that caused his animals to jump the fence. Bronzo told OCFR he's lived on the property for 38 years, Jachles says.

A GoFundMe has been set up to help Second Chance Wildlife Sanctuary rebuild.

"Jim Bronzo has dedicated his life to saving animals," the fundraising page set up by Robin Maynard-Harris wrote "All animals, including those no one else will take … Please help him rebuild. Jim lost everything personally as well, his clothes, photos, phone."

People are also encouraging others to give donations to Bronzo on his website.