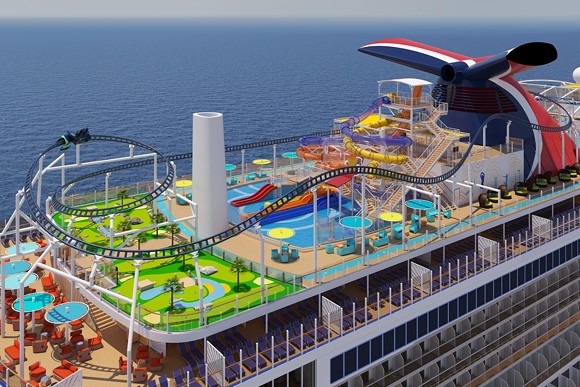 Last month Carnival unveiled the name of their massive 5,200-passenger (with a possible full passenger count of up to 6,600) cruise ship currently under construction.

The Carnival Mardi Gras will be the first ship powered by liquefied natural gas to port in North America. Port Canaveral is currently building the infrastructure needed for the Mardi Gras and other LNG-powered ships, including new ones by Disney, that will call the port home in the coming years.

An actual space-themed terminal is currently under construction at Port Canaveral for the new ship.

Clocking in at 180,000 gross tons, the 1,130-foot-long Mardi Gras is filled with something for everyone. The 20 decks are broken into six distinct zones.

“When our guests … book a vacation on Mardi Gras, they are going to find many firsts and exciting experiences, all enhanced by the fun atmosphere our great Carnival crew deliver on every cruise,” said Christine Duffy, president of Carnival Cruise Line. “We’ve specifically designed Mardi Gras to invite everyone to create their own personalized fun vacation experience with options to suit every age, mood or taste.”

The most talked-about area of the ship is the Ultimate Playground zone (decks 18-20, aft), where the first roller coaster at sea will be found.

The 800-foot-long electric-powered roller coaster will reach speeds of nearly 40 mph as it circles the outdoor activity deck. Sitting below the roller coaster will be a full-size mini-golf course. A full-court basketball area, a ropes course and the largest Carnival WaterWorks water park ever will all be found in this zone.

The WaterWorks will have three main waterslides. A kids water play area can also in the renderings released by Carnival.

Near the Ultimate Playground will be another pool-anchored zone. Lido (decks 16-17, aft) will have one of two Guy Fieri restaurants found on the ship, Guy’s Burger Joint.

A New-England seafood restaurant, a Mexican eatery and a 24-hour all-inclusive soft-serve ice cream spot round out this pool deck, where "dive-in" movies and other entertainment will be offered.

Another pool zone, Summer Landing (Deck 8, aft), is home to Fieri’s other restaurant, Guy’s Pig & Anchor Smokehouse Brewhouse. This smokehouse has its own in-house brewery with proprietary craft microbrews. A pool, whirlpool and numerous lounging options make this the spot to catch a few rays while sipping some beer.

For a completely different experience, guests can stay on Deck 8, but head to the mid-ship where La Piazza is located. This Italian-themed zone is home to a 24-hour pizzeria, the family-style Cucina del Capitano Italian restaurant, and a brand-new Mediterranean seafood concept. A bar will serve as a coffee house and a spot to grab a classic Italian cocktail. Roaming musicians will be found throughout the zone.

Drawing inspiration from the Mardi Gras name, the New Orleans-themed French Quarter zone (Deck 6, aft) will be the ship’s nightclub district. Multiple bars, dining venues, and entertainment will fill this district that will feature a two-deck-high promenade.

Carnival hasn’t revealed many details on this area, but they have confirmed that it will be home to a jazz club where classic New Orleans drinks will be served. An upcoming announcement will reveal a special “celebrity partnership” linked to French Quarter zone. 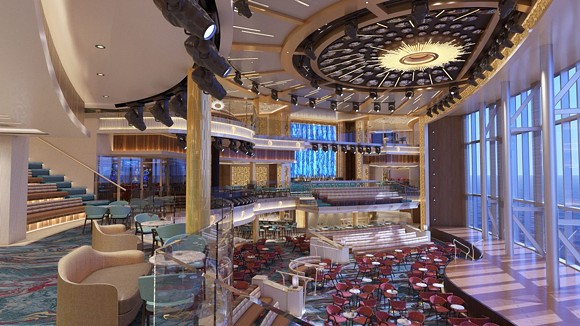 Finally, the last of the six zones will be the Grand Central zone (decks 6-8, midship). This massive atrium area will serve as both a grand entrance hall and a spot for entertainment. Large windows stretch multiple stories and provide an impressive ocean view.

Carnival has placed their popular Bonsai Sushi and Bonsai Teppanyaki restaurants here. Due to their success on other Carnival ships, both venues have expanded spaces on the Mardi Gras. A comedy club will offer nightly shows, and the Piano Bar 88 will both call this zone home. The large windows on one side of the three-deck atrium will serve as the backdrop for nightly entertainment on the stage just in front of them.

Carnival favorites like the adults-only Serenity retreat area, the Alchemy Bar, and the upscale Fahrenheit 555 Steakhouse all return on the Mardi Gras.

The spacious Mardi Gras is focused on expansive decks, the largest of any Carnival ship, that feel like their cut and pasted out of a luxury resort and not found on a cruise ship. With more than 20 categories of staterooms, Carnival is attempting to create a cruise ship that can appeal to every type of cruiser.

Reservations for the Mardi Gras open Jan. 30, at which time Carnival will reveal more details on the upcoming itineraries. The ship will set sail next year.