Following an indictment by special counsel Robert Mueller, FBI agents raided the Florida home of Roger Stone early Friday morning and arrested the former Trump aide and adviser on seven counts, including allegations he lied to and obstructed the House Intelligence Committee's investigation of Russian interference in the 2016 election.

Wild footage from CNN shows the early-morning raid, which happened at around 6 a.m. at Stone's Fort Lauderdale home.

The seven counts Stone currently face include one count of obstruction of an official proceeding, five counts of false statements and one count of witness tampering.

The 24-page indictment shows Stone sought stolen emails from WikiLeaks that could potentially damage Trump's opponents at the direction of "a senior Trump Campaign official."

Though the indictment doesn't directly identify the senior Trump official, it's clear that multiple people were directing the longtime operative and that Mueller's team currently has an incredible amount of emails and phone records on Stone.


Here are a few highlights from the indictment:

- On or about April 9, 2018, STONE wrote in an email to Person 2, “You are a rat. A stoolie. You backstab your friends-run your mouth my lawyers are dying Rip you to shreds.” STONE also said he would “take that dog away from you,” referring to Person 2’s dog. On or about the same day, STONE wrote to Person 2, “I am so ready. Let’s get it on. Prepare to die [expletive].”

- On or about May 21, 2018, Person 2 wrote in an email to STONE, “You should have just been honest with the house Intel committee... you’ve opened yourself up to perjury charges like an idiot.” STONE responded, “You are so full of [expletive]. You got nothing. Keep running your mouth and I’ll file a bar complaint against your friend [the attorney who had the ability to contact the head of Organization 1].”

- “Shortly after Organization 1’s release, an associate of the high-ranking Trump Campaign official sent a text message to STONE that read ‘well done.’”

According to CNN, roughly a dozen officers with "heavy weapons and tactical vests fanned out across Stone's lawn" early Friday morning. When an agent yelled, "FBI. Open the door," Stone opened the door, confirmed his identity to the agents, and was taken into custody.

Stone himself seemed to know the FBI was going to make an arrest on Friday. Just hours before agents stormed his home, Stone posted to his Instagram account that he needs "more than pizza" while he awaits the federal indictment. So, it's not much of a surprise that CNN would have a van waiting in front of his house.
click to enlarge 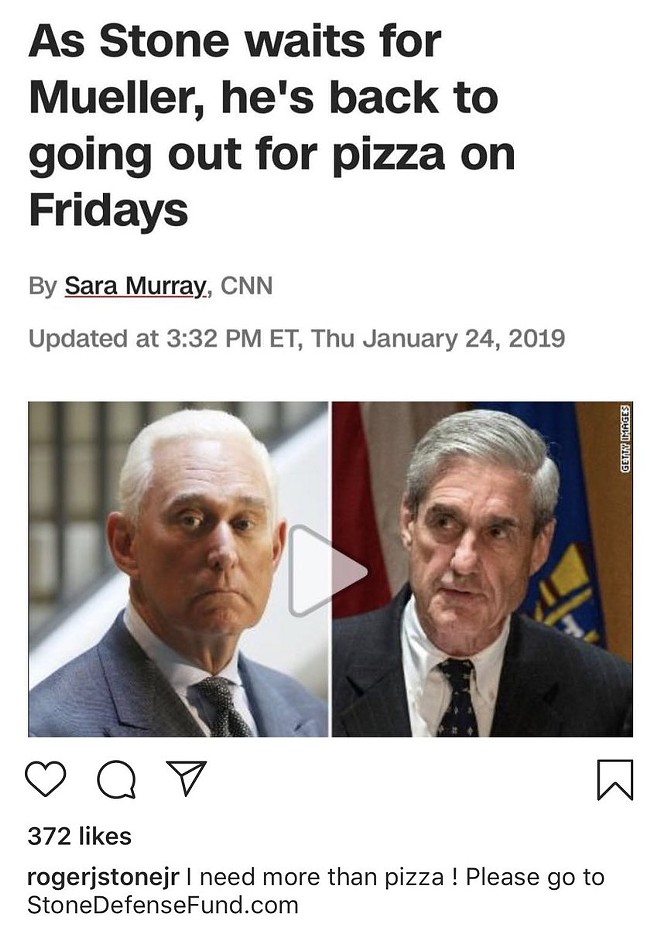 President Trump also seemed to know the end was coming for Stone. Last month, Trump, who Stone has known for over 40 years, tweeted that Stone would never testify against him. "Nice to know that some people still have guts," said Trump.

“I will never testify against Trump.” This statement was recently made by Roger Stone, essentially stating that he will not be forced by a rogue and out of control prosecutor to make up lies and stories about “President Trump.” Nice to know that some people still have “guts!”

Stone is expected to appear before a Fort Lauderdale judge at 11 a.m.

Besides living in South Florida, Stone has quite a few local connections. The Trump affiliate is close with Congressman Matt Gaetz (who he's interviewed on Alex Jones' conspiracy theory show, InfoWars), as well as Seminole County Tax Collector Joel Greenberg, as seen in a Facebook post from 2017.
click to enlarge

Stone has also worked with Orlando attorney John Morgan on medical marijuana reform, and is closely tied to the Florida chapter of the Proud Boys, which the Southern Poverty Law Center lists as an "SPLC designated hate group" and an "extremist group with an ideology of general hate."