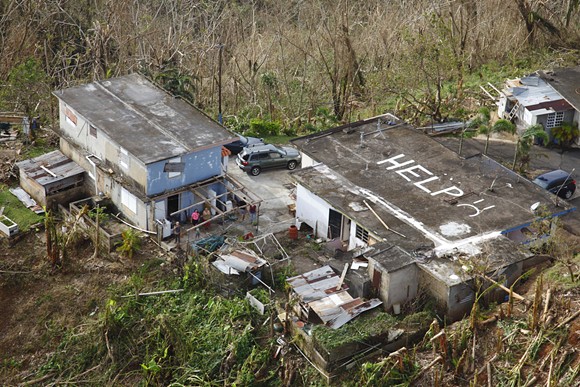 Puerto Rico received less aid from the federal government after Hurricane María than Florida and Texas did after Hurricanes Irma and Harvey, according to a new study published this week.

The disparities in treatment toward Puerto Rico were obvious in the days after María slammed into the island on Sept. 20, 2017. While the U.S. territory was reeling from the destruction caused by 155 mile-per-hour winds and a total electrical blackout, President Donald Trump issued a state of emergency for Puerto Rico, then went to play golf in New Jersey and complain about NFL players protesting police brutality. When he finally visited the island 13 days after landfall, Trump threw paper towels at hurricane victims and lauded the fact that only 16 people were officially listed in the death toll – despite multiple reports indicating dozens of fatalities had not been included.

But the new study published in BMJ Global Health quantifies this inequality with actual dollar amounts. The federal response was "faster and more generous" in terms of resources and staffing provided to Texas and Florida after Hurricanes Harvey and Irma, compared to María, the study says. While Harvey and Irma claimed 103 lives and 92 lives respectively, an estimated 3,040 deaths are attributed to María. Researchers from the University of Michigan and the University of Utah found:

- Within the first nine days after the hurricanes hit, both Harvey and Irma survivors received nearly $100 million in FEMA. María survivors only received slightly over $6 million in recovery aid in the same time frame.

- At the peak, 19,000 federal employees were posted in Puerto Rico about one month after María – about 12,000 employees less than peak staffing in Texas, which was at 31,000. The study says the amount of food, water, tarps and helicopters were "lower and slower for delivery" in Puerto Rico than in Texas and Florida.

- While federal lawmakers approved $15.25 billion for Texas and Florida in disaster aid grants in September 2017, Puerto Rico was only offered $4.9 billion in the form of a loan. FEMA and the Treasury Department decided not to give Puerto Rico this disaster loan because its cash balance was too high. A bill finally signed by Trump in February 2018 – five months after María – gave Puerto Rico money on the condition that the island establish  a 12-month and 24-month recovery plan endorsed by the PROMESA oversight board. Texas and Florida got funds without these conditions. Trump, though, has indicated he wants to use the nearly $14 billion allocated in disaster relief money for Puerto Rico, Florida, Texas and California to pay for a border wall.

"This result would be unsurprising if Hurricane María was less damaging than Irma and Harvey," researchers say in the study. "However, Hurricanes Harvey and Irma made landfall as category four hurricanes, and María hit Puerto Rico as a 'high-end' Category 4, or just below the threshold of a Category 5 hurricane. María caused more damage in Puerto Rico than Irma in Florida or Harvey in Texas in terms of loss of electricity and housing destruction, with overall damage estimates comparable to Harvey, and greater than estimates for Irma."

The study notes that the Trump administration argues the delay of money and goods to Puerto Rico was based on "geographic limitations." Days after María, Trump said federal aid was being hampered because the island is "surrounded by water. Big water. Ocean water."

The study instead concludes that while physical distance may have hindered the federal government's access to the island, other causes like racism against the Puerto Rican people and disaster fatigue contributed to the administration's response.

"This paper demonstrates that the disaster responses to hurricanes Harvey, Irma and Maria were different to the degree that they do not align with storm severity or prevention and recovery needs and may substantially affect deaths and recovery rates," the study says. "What cannot be contested is that the responses were in fact different across critical time points, and these differences have serious consequences for acute and long-term health outcomes and recovery efforts."

FEMA has since called the study's finding that the federal response for María was slower compared to Harvey and Irma "absurd," according to a statement provided to CBS News.

"FEMA's response efforts in Puerto Rico is the largest and longest commodity delivery mission in the agency's history," an agency spokesperson told CBS. "There were real challenges in Puerto Rico that had to be overcome – including aging infrastructure, a decayed power grid and liquidity issues."

« Florida Secretary of State says no…  |  Once again, Orlando ranks as the co… »