Kissimmee has been without a water park ever since Water Mania closed its doors in 2005 and in the years since, the area's infamous Highway 192 tourist district has struggled to remain relevant.

The recession plus massive new developments on I-Drive, at Universal Orlando and at Disney World has meant new competition for Kissimmee. After much disappointment, the biggest hope yet for 192 is just a few months away from its big debut.

The $750 million Margaritaville Resort Orlando has already transformed the 300-plus-acre property where the failed Splendid China attraction was previously found, and has led to numerous new projects in the surrounding area.

The Margaritaville Hotel is a 184-room hotel located at the center of the new resort. A 13-foot-tall sculpture of a flip-flop and a chandelier made of over 300 margarita glasses decorate the lobby. Behind the hotel is a large swim lagoon, home to the Fins Up Beach Club.

Four dining options will be available in the new hotel, including a poolside grill exclusive for resort guests and an upscale seafood grill with an open-air kitchen. A spa, a kids club, a teen center, and more than 40,000 square feet of events space round out the hotel’s offerings.

Roughly a thousand Key West-inspired cottages are nestled around the man-made lagoons of Margaritaville. Each cottage will be privately owned, but the resort will offer services such as housekeeping, on-demand grocery delivery, and decor packages. The Margaritaville Cottages are designed for easy vacation rental options for owners. 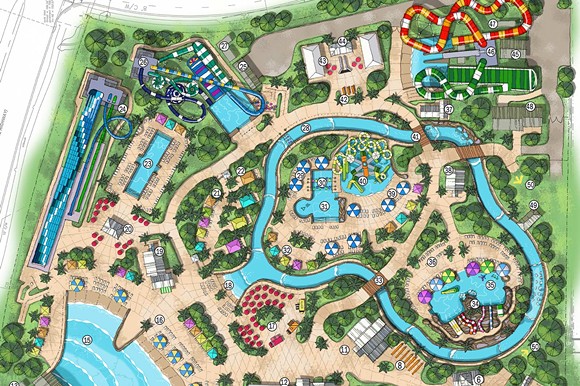 By far one of the biggest and yet least reported aspects of the Margaritaville Resort Orlando is the brand-new Island H2O Live! waterpark. With nine slides and numerous other attractions, the tropical-themed water park will be the largest single-site installation in the southeast for Canadian waterslide manufacturer WhiteWater West, best known locally for their Ray Rush slide at Aquatica and their waterslides found on Carnival cruise ships.

The lineup of attractions includes a multi-person mat racer, drop towers, family raft rides, an interactive lazy river and a giant wave pool. Multiple DJs and dance parties will be found throughout the lushly landscaped park. Similar to a cruise ship, the water park will have an adults-only area. This will be the first water park in the area with areas where no children are allowed.

, an RFID bracelet and mobile app system, similar to the Tapu Tapu system found at Volcano Bay, will make the Margaritaville Orlando water park one of the most technologically advanced waterparks ever built.

Island H20 Live’s Vantage system will have many of the same interactive elements that Universal’s Tapu Tapu has, but via its linked mobile app, Vantage also offers many features not found at Volcano Bay, including on-ride photos and videos that can be easily shared across various social networking sites, custom on-ride music, and guest-designed on-ride lighting effects. In-park purchases, locker access and other services will also be linked to Vantage.

The mobile app will provide unique audiovisual experiences, in-app karaoke and a loyalty program that tracks guests each time they visit. Island H20 Live states that the loyalty program will allow guests to win prizes such as skip-the-line passes, free food and beverage items, and more.

“Water parks are known for exhilarating rides and attractions, but Island H2O Live will let guests be playful in interactive ways that have never been seen before,” said Albo Antenucci Jr., the executive in charge of Horizon Waterpark, in a prepared statement. “These incredible opportunities for engagement will be what Island H20 Live is all about.”

“These features speak to the ‘Live’ part of our name. … Customization offers guests the creative space to develop their own adventures, to be in the moment, but then capture those moments and share them in real time.”

Island H20 Live! is planned to open this spring. No information on ticket prices has been shared, but on the water park’s website annual prices are seen listed at $79.99, though they have yet to go on sale officially. No hard date has been announced for the new water park, but it should be sometime this spring.