Excellent news for the hungry among us: Starting Friday, Nov. 9, Hunger Street Tacos will stage a Mexican omakase at The Heavy in Winter Park. There will be two seatings for 12 people each – one at 5:30 and one at 8:30 p.m. No info on price yet. 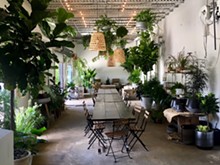 Omakase is a Japanese word usually heard in sushi restaurants, but it means, roughly, "I trust you." It's a meal in which the diners put themselves in the hands of the chef, eating whatever they decide to serve, which could even change in the moment. In other words, don't ask for the menu – just take the ride.

Back in April, we interviewed Jen Crotty on her plan to turn the old Lombardi's space into something new, and she had this to say:

"The basis is a retail venue and environment with coffee, plants, and a 'flower bar' with an emphasis on design. We will be selling the work of many local makers and hosting events centered around the community and the curators."

Crotty is in the process of signing on vendors, but she's been in talks with Hunger Street Tacos, Pizza Bruno and Papa Llama as potential food vendors.

Hunger Street's Joe Creech told me he's definitely exploring the idea and is working on securing funding for what would be Hunger Street's second location.

"It wouldn't be Hunger Street Tacos as everyone knows it," says Creech, "but a different concept. The idea we're considering is a Mexican omakase."


We were way off in calling it a food hall or implying that this would be a second location for Hunger Street, but damn, the long wait was worth it knowing that the weekly Hunger Street omakase is actually happening (until it isn't anymore ... we know better than to assume anything about the Heavy). Buen provecho!

Related Best We're Not Sure What It Is, but We Like It: The Heavy

Best We're Not Sure What It Is, but We Like It
The Heavy
Goods & Services
click to enlarge