Despite record attendance, Animal Kingdom will soon see an entire land shut down with nothing confirmed to replace it

Despite rumors of its demise stretching back years, Disney surprised many this late last week when they confirmed to cast members that Rafiki’s Planet Watch in Kingdom will close next month.

Recent rumors have pointed to the behind-the-scenes mini-land as transitioning to a seasonal attraction, only being open during the busiest times of the year, but with cast members now destaffing the mini-land just ahead of the busy holiday season, any seasonal operations seem unlikely, at least for the time being.

Rafiki’s Planet Watch has always been a bit of an odd attraction. To access the mini-land, guests in Animal Kingdom must walk to the back of the Africa area then board a train explicitly designed to show off backstage areas of the park before arriving at a station that still requires a good two to three-minute walk down mostly plain looking pathways in order to access an un-themed industrial like facility that housed a small petting zoo next to it.

The path between the train station and the main buildings have small informational signs along it with a few small animal habitats. On park Disney classifies this pathway an attraction, but as popular Disney information site, Touring Plans has said the idea of this being an attraction "seems absurd."

It’s not just the pathway that is the problem with Rafiki’s. Critics have said the area would be more at home in a local zoo than in what is now the third busiest theme park in the United States. Part petting zoo and part animal care facility, Rafiki’s Planet Watch, with its lack of theming, late 90s aesthetics, and focus on behind-the-scenes has always felt like an odd area for a Disney park. The animal care facility within Rafiki’s is known as the Conservation Station. Here, guests can view live veterinary care firsthand via large windows. and occasional animal encounters inside Conservation Station allow guests to get a firsthand experience. Some small animal exhibits, including tarantulas, scorpions, millipedes, and snakes, are also displayed in this area. Disney has yet to announce what they plan to do with these smaller animal exhibits after the area closes. 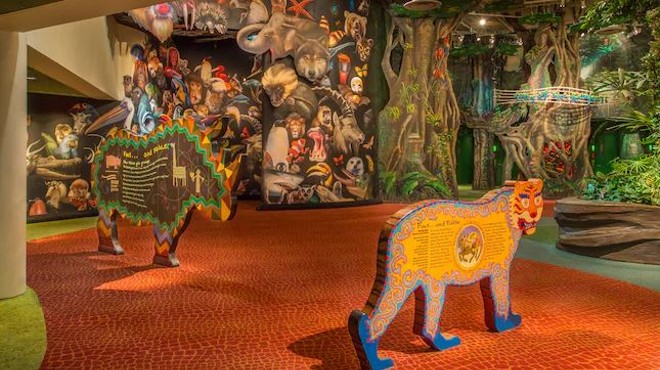 There are a few science center-like attractions within Animal Kingdom where guests can learn about various aspects of the animal world.

The petting zoo, known as the “Affection Section,” mostly has goats with a few other farm animals for guests to pet. A small outdoor amphitheater next door to the petting zoo is home to an educational live animal show. The amphitheater is one of the smallest show venues in all of Walt Disney World.

Rafiki’s also has a small outdoor gift shop but no food options. The Conservation Station based Doc McStuffins meet-and-greet will be closing, but luckily Rafiki looks to be spared thanks to a new Lion King themed dance party coming to Discovery Island. While not officially confirmed that Rafiki will be a part of the new dance party, but he is prominently featured in the marketing images for the upcoming dance party.

Also still unclear is why Disney is closing the difficult to find mini-land. Many fans are pointing to a dated rumor as what they hope is happening.

In 2015, Disney historian and insider Jim Hill shared that he had been hearing rumblings of Disney looking to bring the smash hit Zootopia to the park. Zootopia has appeared at Rafiki’s Planet Watch via a small exhibit outside of Conservation Station that kept with the behind-the-scenes theme by showing how the characters in the film were created.

A television looped a video of Zootopia creators studying animals at the Animal Kingdom. This exhibit was the only real presence of the film that grossed more than a billion dollars at the box office.

Over the past year, Hill has increased his mentions of the project, but others questioned if the project was actually happening. Then earlier this month Orlando Theme Park News, a Central Florida tourism news site, reported that sources with an insider knowledge confirmed to them a Zootopia area is in the works for Shanghai Disneyland.

The article begins with OTPN stating that they trust their sources, but the project is still unconfirmed. No timeline was given for the Shanghai Zootopia land, but according to OTPN, it will have mini-lands, similar to New Fantasyland’s three distinct areas, based around the different ecosystems found in the movie.

OTPN didn’t share many details of what the new land will include, but the previously rumored addition to the Animal Kingdom included a significant ride, numerous retail and dining options, and a few smaller carnival-style flat rides.

Last year, as Hill began pushing the Zootopia rumor even harder than before, many fans wrote it off as wishful thinking. At the time, the hope was Pandora and other additions to the park would be enough to make the park a “full day” theme park experience, but that hasn’t proven to be the case.

The nighttime fountain show is widely viewed as a flop and other additions, like the new Up!-themed bird show, seem not to be doing as well as Disney was likely hoping for. This has caused the idea of a major new addition to the park isn’t as easily dismissed.

Recent land clearing around the Rafiki’s Planet Watch train station points to something happening to the area, but it is unclear if this is for guests or Animal Kingdom’s backstage operations.

Other additions to Kingdom have ranged from Australia to South America to Indiana Jones, but none have received the details the Zootopia rumor has included. The primary concern around the new land is the train access that limits crowd flow. One possibility is
click to enlarge

the train ride being replaced with a screen-based experience similar to Universal Orlando’s Hogwarts Express but themed to the monorail seen in the opening of Zootopia. This would help limit backstage views heading into and out of the land, but any such ride-based system would struggle with the same crowd flow issues that have plagued Rafiki’s since its opening. To connect the area to the rest of the park via a sidewalk would mean three-quarters of a mile walk from the nearest guest areas, more than double the length of Main Street in the Magic Kingdom. Various backstage roadways and operations also intersect the train path between the station in Africa and Rafiki’s Planet Watch.

With no easy answer to how the land can connect with the rest of the park, Disney may choose to leave the entire area closed to most guests. Many of the backstage areas visible from Rafiki’s and the train ride are still accessible by guests thanks to various upcharge tours. All of those tours look to be staying for the time being.

Both meet-and-greets in Rafiki’s will close by the end of this month, with the entire area closing October 21. The new “Hakuna Matata Time Dance Party” will begin in January on Discovery Island with what the Disney Parks Blog calls “three-dimensional photo opportunities” inspired by the film found around the island.

Kingdom will also see updates to the Rivers of nighttime show, and other entertainment around the park in the coming months. Most of those details have yet to be publicly shared by those involved.