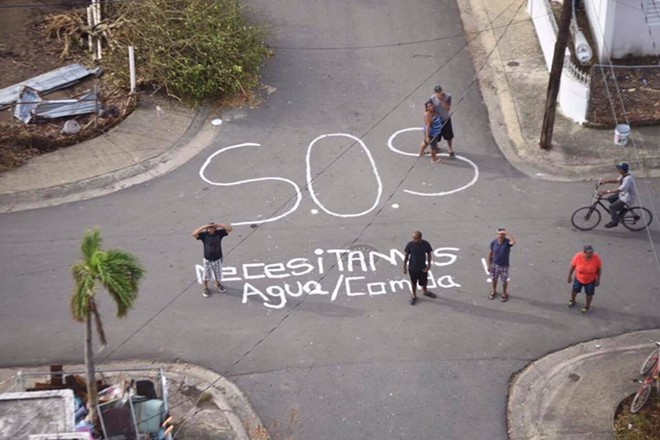 A year after three hurricanes wreaked devastation across Texas, Florida and Puerto Rico, MSNBC reports the Trump administration took nearly $10 million from the Federal Emergency Management Agency's budget and transferred it to U.S. Immigration and Customs Enforcement to fund deportations and detention centers.

The news comes as the Carolinas face potentially catastrophic damage from Hurricane Florence this Friday and as President Donald Trump called his administration's inadequate response to Puerto Rico an unsung success – despite the, you know, 2,975 estimated deaths and millions of people going months without electricity.

U.S. Sen. Jeff Merkley, D-Oregon, told MSNBC's Rachel Maddow that the transfer of about $9.8 million in FEMA funds to ICE was reportedly done at the start of this year's hurricane season.

"It means that just as hurricane season is starting … the administration is working hard to find funds for additional detention camps," Merkley told Maddow. "This is all part of the child separation policy, and that's how this information came into my hands, because of my work on this issue of trying to stop the child separations."

Tyler Q. Houlton, a spokesperson for the Department of Homeland Security, said on Twitter that the money did not come from FEMA's "disaster relief funding." Rather, the money is from the agency's budget for training, travel public engagement sessions, infrastructure maintenance, IT security support, and response and recovery operations, according to documents provided by Merkley to MSNBC.

The money in question — transferred to ICE from FEMA’s routine operating expenses — could not have been used for hurricane response due to appropriation limitations. DHS/FEMA stand fiscally and operationally ready to support current and future response and recovery needs.


USA Today reports the documents provided by Merkley show funds taken from FEMA, the Transportation Security Administration and the U.S. Coast Guard were to assist ICE "detain immigrants along the southern border, fund beds in detention centers and remove undocumented immigrants from the country."

"ICE must have sufficient detention bed capacity to detain illegal aliens when necessary as it enforces the Nation's immigration laws as fairly and effectively as possible," the budget document states.

As Florence approaches the East Coast, it's revolting to imagine that people could again be abandoned in the aftermath of a disaster because their federal government thought it was fiscally more important to get rid of undocumented immigrants instead of spending money on basic hurricane recovery.