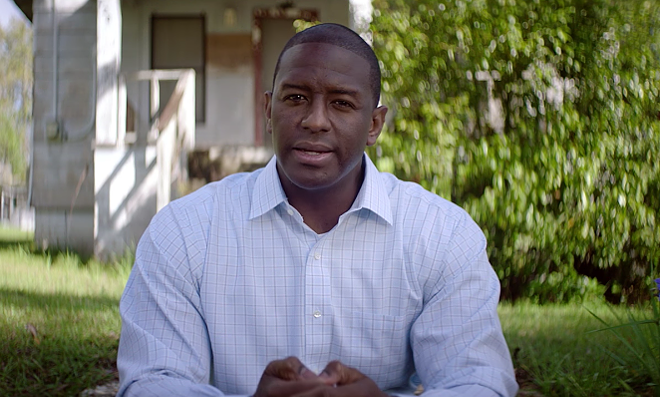 Neo-Nazis and white supremacists are targeting Democratic gubernatorial candidate Andrew Gillum with racist robocalls so gross that several media outlets have refused to publish the audio.

The Tallahassee Democrat reports the calls were paid for by The Road to Power, an Idaho-based anti-Semitic, white supremacist website group who is responsible for other racist robocalls around the country. On the robocall targeting Gillum, someone pretending to be the Tallahassee mayor uses "an exaggerated minstrel dialect with jungle noises in the background," according to the Democrat.

"This is reprehensible – and could only have come from someone with intentions to fuel hatred and seek publicity," a spokesperson from Gillum's campaign told the Democrat. "Please don’t give it undeserved attention."

Gillum's Republican opponent, U.S. Rep. Ron DeSantis – who faced backlash earlier this week after telling Florida voters not to "monkey this up" by elected Gillum – also denounced the robocalls. DeSantis has denied his comments had any racist connotations.

"This is absolutely appalling and disgusting – and hopefully whoever is behind this has to answer for this despicable action," a DeSantis spokesperson told Politico. "Our campaign has and will continue to focus solely on the issues that Floridians care about and uniting our state as we continue to build on our success."

The DeSantis campaign has had a rough start since the Trump-endorsed nominee won the primary – on Friday, liberal groups accused DeSantis of being administrator of a Facebook Tea Party group dedicated to sharing racist memes and spreading conspiracy theories, according to the Miami New Times.

The Orlando Weekly reached out to the DeSantis camp for a comment but didn't receive a response – a campaign spokesperson did tell the New Times, though, that DeSantis was "completely unaware that he was part of the Facebook group, which he was added to without his knowledge or consent. As soon as he found out about it, he immediately deleted it."