Those long-rumored new monorails at Walt Disney World might be even cooler and higher-tech than anyone realized. Disney’s obsession with projection mapping and augmented reality might see some real-world application on the new monorails.

In recent episodes of their Disney news podcast, The Disney Dish with Jim Hill, Disney historian industry insider Jim Hill has been working with Touring Plans founder and statistical genius Len Testa to uncover a highly confidential plan within Disney to develop augmented reality windows for transit systems. The technology piggybacks on recent patents by Disney, including a fascinating one that uses projection mapping within hotel rooms.

Hill and Testa initially reported that the system would be used within the rumored self-driving cars that are expected to begin being used at Walt Disney World within the next few months. But in their most recent episode, Testa says that a “Disney insider” has reached out to him and claims that the technology will instead be used on the monorails. He gives an example: When the monorail passes Spaceship Earth, the Epcot structure could be transformed into the Death Star from Star Wars with X-wing fighters flying around it. He also mentions that the technology would be able to recognize if it was a cloudy day and the augmented view would then include clouds.

This window upgrade rumor comes just weeks after retired Disney Imagineer and Disney Legend Bob Gurr said he was confident that Disney was in talks to update the aging monorail, pointing out that the system was well past its intended lifespan, and mocked the current monorail fleet by calling it a “duct tape monorail.” He also confirmed that Bombardier, who built the present WDW fleet, is the vendor of choice for the new fleet. 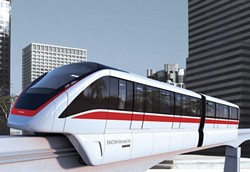 When rumors of the new fleet first leaked last month, many speculated that Disney would use one of Bombardier’s pre-existing designs, which are greatly influenced by the current Disney Mark VI trains. Even before we knew of the possible AR-equipped windows, many thought that Disney would adjust the Bombardier design so they could trademark it, allowing them to use the monorails in their successful WDW transit line of retail gifts. Initially, the thought was that this customization would only be on the front and back cars where Disney would add their signature monorail cone nose design, but now it looks like the Disney customization may extend throughout the entire train to include features such as the windows and possible LED-themed lighting. Disney showed off a bus with this LED lighting at a fan convention a few years ago but has given no updates on the technology since then.

If rumors are correct, the new trains should be announced within the next two years, with the first of the fleet operational by the WDW 50th Anniversary in 2021.