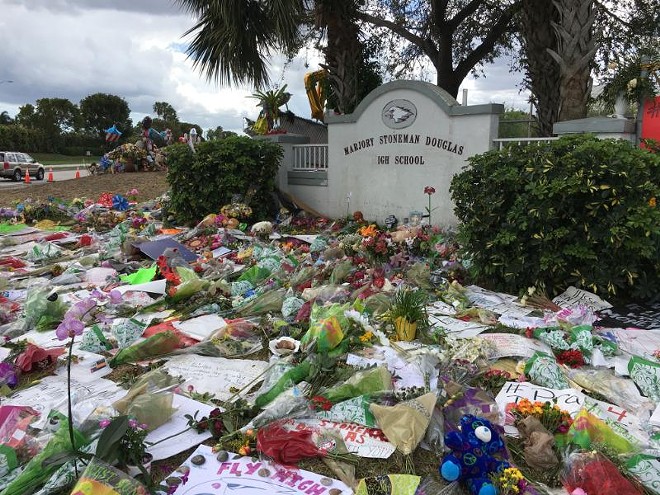 A teacher from Marjory Stoneman Douglas High School was arrested after deputies say he left a loaded gun in a public restroom that was later fired by a drunk homeless man.

The Sun Sentinel reports Sean Simpson, 43, is a chemistry teacher who was at the Parkland high school when a gunman killed 17 people on Feb. 14. Simpson has a valid concealed weapons permit, and a Broward County School Board spokesperson said the district does not plan to take any disciplinary action against him.

Broward County Sheriff's deputies say Simpson told them he accidentally forgot his Glock 9mm in a restroom stall at the Deerfield Beach International Fishing Pier. Five minutes after realizing his mistake, Simpson said he went back to the bathroom to get his gun and heard a shot, according to the Sentinel.

Deputies said Simpson found Joseph Spataro, 69, holding the gun and a bullet in the wall. No one was hurt in the incident. Simpson snatched the weapon out of Spataro's hand, and it was in his pocket when law enforcement responded to the scene, the Sentinel reports.

Simpson was arrested and charged with failing to safely store a firearm, a second-degree misdemeanor. Spataro, 69, was charged with firing a weapon while intoxicated and trespassing.

WPLG Local 10 reports the Stoneman Douglas teacher has been supportive of his students' efforts for gun control by attending the March For Our Lives protest against gun violence in Washington D.C. last month. Simpson has also seemed open to President Donald Trump's proposal of arming teachers, according to Local 10.

"I know there are some of us that are willing to take the training if it was offered and probably be another line of defense," Simpson said, according to Local 10. "But again that is a complicated subject, and I'm not sure if it's the answer."