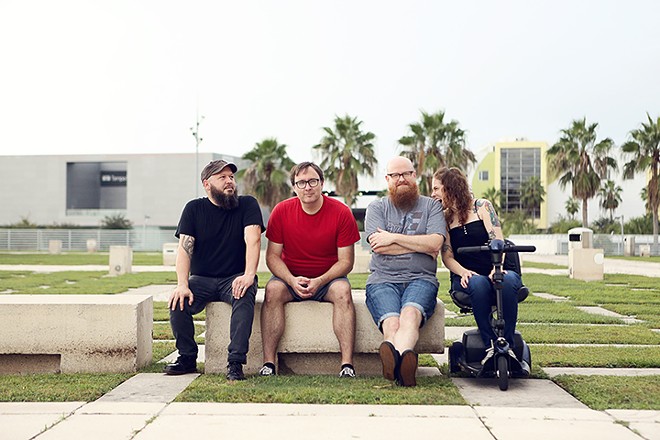 Pohgoh were a Tampa band that had some accomplishment and acclaim back in the golden indie-rock era of the ’90s, including a split 7-inch with true Midwest emo heroes Braid. After four years, they disbanded and receded into history. Two of its members – married partners Susie and Keith Ulrey – went on to become more famous for their defining Tampa indie label New Granada (home to exceptional acts like DieAlps!, Coeds and Permanent Makeup) and record store Microgroove. Then in 2015, Pohgoh suddenly got reinstated after 17 years to dust off their sweetly sentimental guitar rock for the fresh ears of the current ’90s revival. And so far, they’ve proven more serious than many reunited bands, dropping a new single (“Try Harder”) in 2016 that’s probably their most confident work yet and impressing live here at the Social, opening for Hey Mercedes. Now, they’re putting the final touches on a J. Robbins-produced album – their first in 20 years! – that’s slated for a September release. Come see some Florida indie-rock history restored to full living color alongside Orlando’s upward and absolutely incandescent Expert Timing.