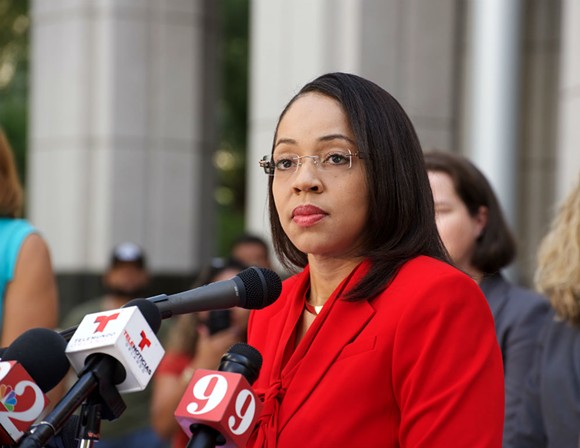 Gov. Rick Scott's administration is demanding answers from Orange-Osceola State Attorney Aramis Ayala on her death-penalty review after a missed deadline on a capital case.

The letter from Scott's general counsel Daniel Nordby is the latest in the public feud between Scott and Ayala that was ignited in March after Ayala declared she wouldn't be pursuing the death penalty during her time in office. Ayala had been elected months before as Florida's first African-American state attorney. The governor took 30 first-degree murder cases from Ayala and assigned them to Ocala-based State Attorney Brad King. After a showdown in the Florida Supreme Court over whether Scott had the authority to remove her, Ayala lost her case and announced in August she would assemble a seven-member panel of prosecutors who would determine what cases deserved the death penalty.

Scott's office rekindled the fire after Ayala's office apparently missed the deadline to file the state's intention to seek the death penalty for 33-year-old Emerita Mapp, who is accused of stabbing one man to death and injuring another at a Kissimmee motel last April. After Scott called Ayala's actions "absolutely outrageous," Ayala placed the blame for the missed deadline back on Scott, saying his office had pledged to look over all the murder cases in the Ninth Judicial Circuit and "failed in his review."

In the letter, Nordby says Ayala knew the deadline had lapsed but "knowingly" filed the state's notice to seek the death penalty in Mapp's case.

"At best this suggests negligence – and, at worst, willful disregard – in the faithful performance of the duties of your constitutional office," Nordby wrote. "In any event, it is a clear disservice to the hardworking men and women of the law enforcement agencies in your circuit and to the crime victims and their families impacted by the offenses you are charged to prosecute. They deserve better."

Scott's office wants in writing from Ayala answers on the death penalty review panel's procedures; the number of cases that have resulted in a unanimous decision to seek the death penalty; a list of members; dates met; and more information about their review of Mapp's case. The governor is also requesting billing information from a Washington, D.C. public relations firm that Ayala's office used during her court fight with Scott. The governor's office also charges Ayala with refusing King's help to develop a procedure to review cases for death penalty consideration.

Eryka Washington, a spokesperson for Ayala's office, said the office had just received the letter and would be providing a response after they reviewed it.