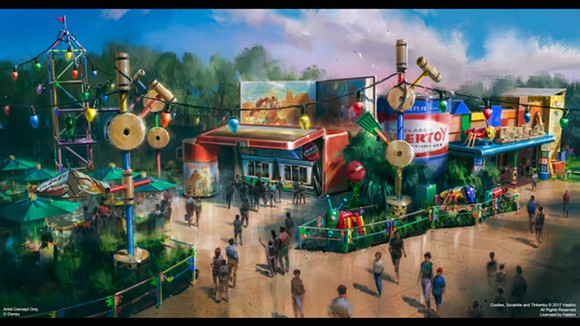 This morning, the company announced a few details on a new snack kiosk, Woody's Lunch Box, that will open in the Toy Story Land area next year.

The quick-service window will be modeled after Andy's lunch box and thermos, and is designed so that guests feel as if they're "toy-sized." No specific details about the restaurant's menu have been released yet, but the company said it will serve "tasty meals and old-fashioned soda floats."

As we previously reported, the Slinky Dog Dash, a family-friendly roller coaster, and Alien Swirling Saucers, inspired by the little green space creatures from Pizza Planet in the first Toy Story film, will also be included in the new area.

Toy Story Land is a new addition to the Hollywood Studios section of Walt Disney World and will open sometime in the summer of 2018.