Orlando mayor says rainbow crosswalk will be installed near Pulse 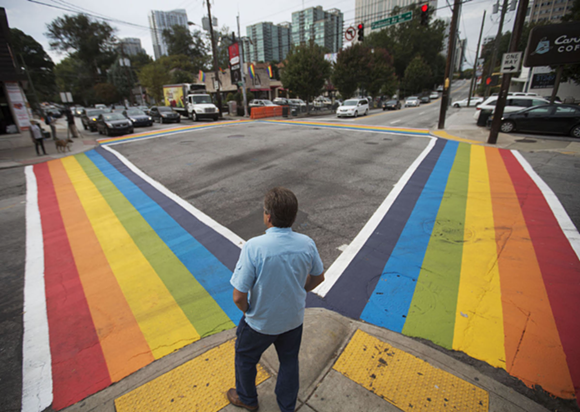 Orlando Mayor Buddy Dyer says a rainbow crosswalk will be installed near the gay nightclub Pulse on West Esther Street.

In July, a petition circulated online asking the city of Orlando to paint a rainbow crosswalk near Pulse on Orange Avenue and Kaley Street to honor the 49 victims who died in the shooting massacre at Pulse on June 12, 2016 and recognize the struggle of survivors. The online request ended up garnering 2,779 signatures.

Dyer says the rainbow crosswalk will be painted for pedestrians on the street going from the Dunkin' Donuts to Pulse, which are about 200 feet apart. It wasn't immediately clear, though, if the crosswalk would go horizontal for a few feet or extend vertically at all. Orlando Weekly reached out to a city spokesperson but did not receive an immediate response. At an Orlando City Council meeting on Monday, Dyer said there were jurisdictional issues with Orange Avenue and Kaley Street, which is why Esther Street was chosen.

"We feel like Esther is a more appropriate place anyway so we don't have people that are out in traffic trying to take pictures while walking on the rainbow crosswalk," Dyer says. "On Esther, there won't be as much traffic and it will be a much better place if people are going to take pictures."

Orlando Commissioner Patty Sheehan said she was talking to city staff and the rainbow crosswalk appears to be going in by this Wednesday, Oct. 11.

"It's a labor of love," she says. "It's something that came from the community, and I think it's important we honor those requests. … It'll be a nice tribute as well."

UPDATE: Orlando’s rainbow crosswalk will cost $2,900 and will be replacing the current crosswalk at West Esther Street, a city spokesperson says.

Cassandra Lafser, spokesperson for Mayor Dyer’s office, says the city’s permit for a pilot project to create a decorative sidewalk near Pulse was approved by the Florida Department of Transportation. City staff will begin installing the rainbow crosswalk on Tuesday, Oct. 10 and should be done by Wednesday, Oct. 11, if the weather cooperates. Lafser says there will be no interruption to traffic as the crosswalk is put in – flaggers will maintain access onto Esther Street.

"Many members of the community contacted the city about creating a colorful commemorative crosswalk similar to ones other communities have done," Lafser says in a statement. "The crosswalk will be on West Esther Street off South Orange Avenue and include a rainbow color pattern to honor the memory of the 49 lives lost and the lives of those that were forever changed on June 12, 2016. This will serve as a symbol of our compassion, love and unity in the Central Florida community."