When it comes to the National Space Council, Mike Pence is light-years behind 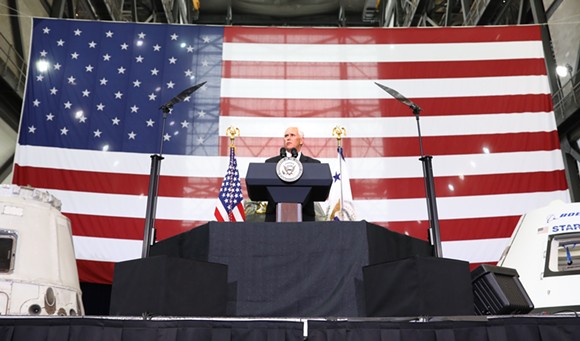 The signing ceremony was joined by various lawmakers, Boeing executives, and veteran moon-walker Buzz Aldrin who stood next to the president.

As with most space councils in the past, the vice president assumes the role of chairing the council, which means Mike Pence might have a chance to show that he actually cares about space. He’s been meeting with aerospace contractors and touring spaceport facilities around the country since the executive order was signed. However, his record on science legislation and the content of his speeches prove he’s going to have to do a little more than show face in the United States’ spaceflight icons.

When he was a congressman back in 2005, Mike Pence and other GOP lawmakers sponsored legislation that called for the immediate end to NASA’s shuttle program that was working to send astronauts to the moon. tweet this

Air Force Two touched down on NASA’s Shuttle Landing Facility in Cape Canaveral Thursday, July 7. Mike Pence stepped off the plane with Florida Senator Marco Rubio and spent the afternoon driving around Kennedy Space Center in his motorcade. He made stops at the Vehicle Assembly Building (VAB), where he delivered an awkwardly dramatic speech in front of hundreds of NASA employees, and at the Orion program’s Operations and Checkout building where he sauntered around spacecraft hardware and watched Lockheed Martin engineers at work. "With the National Space Council, we will grab that destiny with both hands and go to work with each and every one of you” Pence told hundreds of NASA employees in the VAB.

The Vice President’s visit to NASA was generally seen as a contradiction to what his administration stands for. His speech was reminiscent of campaign-season hypernationalism: filled with emotional clichés for crowds who prefer hype over substance; platitudes over conviction. Yet in the Vehicle Assembly Building, the historic heart of America’s space efforts, the words that filled the 525-foot-tall atrium sailed over the heads of hardworking engineers who only speak the language of science. 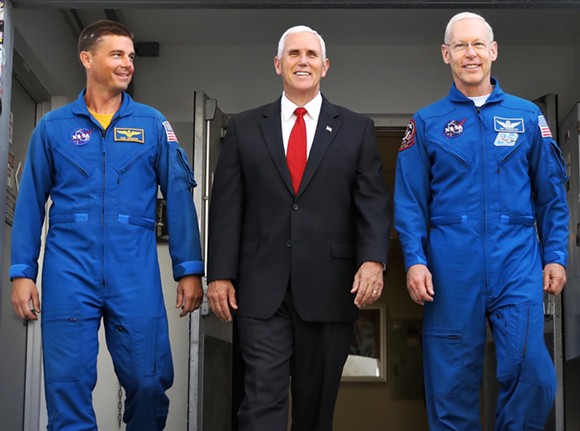 Donald Trump and his White House have created an ugly anti-science image for their administration. He appointed Scott Pruitt, a climate change denier, to lead the Environmental Protection Agency. Troves of invaluable climate change data have since been removed from the agency’s website. Additionally, Donald Trump has yet to approve a NASA administrator seven months into his presidency. Barack Obama appointed Charles Bolden as NASA’s administrator in a little less than 4 months.


When he was a congressman back in 2005, Mike Pence and other GOP lawmakers sponsored legislation that called for the immediate end to NASA’s shuttle program that was working to send astronauts to the moon. Ending the program 5 years early, he thought, would save funds for rebuilding the ruins leftover from Hurricane Katrina, which had already gathered nearly $120 billion for emergency relief and long-term reconstruction projects. The political fallout and the cost of canceling the program prematurely would have outweighed any value of savings, which is why the unpopular proposal never passed.

What makes space exploration so different from the other areas of science that have been axed, criticized, or flat-out denied by this administration? Exploring space has been used as a tool to catalyze innovation since the first National Space Council was created in 1989. Nationalized human spaceflight is the epitome of a country’s level of technological progress in both public and private sectors, and the Trump administration wants to flex their muscles by investing in it.

The National Space Council goes way back. When it debuted under president George H.W. Bush, the council combined top officials from national security, intelligence, and defense agencies to formulate policy and advise lawmakers on space. Since President Clinton axed the council in 1993, matters of space policy have mainly been left to the Office of Science and Technology Policy (OSTP), which the Obama administration payed close attention to.

Few administrations have fully realized the potential of space innovation, and a National Space Council seeks to reverse that by bringing it into the context national defense and matters of foreign policy rather than just a practice of scientific research. While some assert the council just adds another layer of bureaucracy to formulating space policy, many find value in engaging the White House with space innovation in ways the OSTP was never able to do.

But a productive National Space Council under president Trump is questionable, like many of his other advisory councils. SpaceX founder and CEO Elon Musk and Disney CEO Bob Iger left Trump’s business advisory council when the administration removed itself from the Paris Accords last month. Musk and other CEOs pushed the administration to remain in the Accords, and its refusal to do so weakened the credibility and usefulness of advisory councils. Many expect the newly formed National Space Council to be another useless cause in which the anti-science Trump Agenda will preside over core scientific interests. But if the White House has an ear on the space industry and a sweet tooth for business interests, greater federal funding will be the result—and that might be just enough for an increasingly competitive commercial space market.