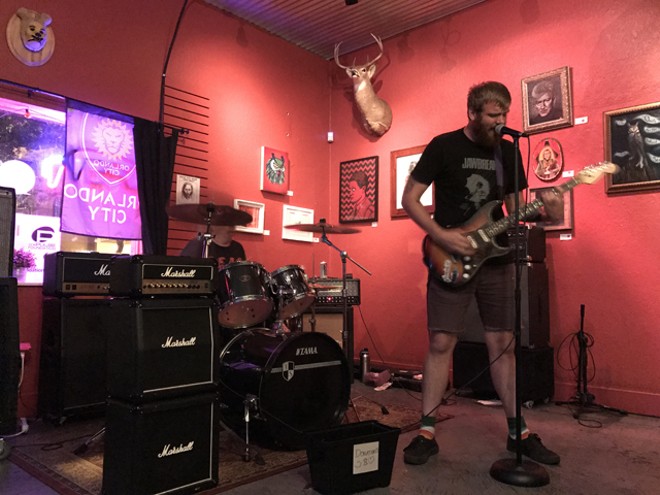 For a place that isn’t foremost a live venue, I’ve seen a nicely wide range of music at the Falcon. Though the neighborhood art bar has smartly avoided the generic acoustic thing that you can get almost anywhere people don’t go to listen to music primarily, most of the live affairs have been appropriate to the space. Austin duo Dull, however, brought music and execution that’s built for a rock club, or at least a packed warehouse. 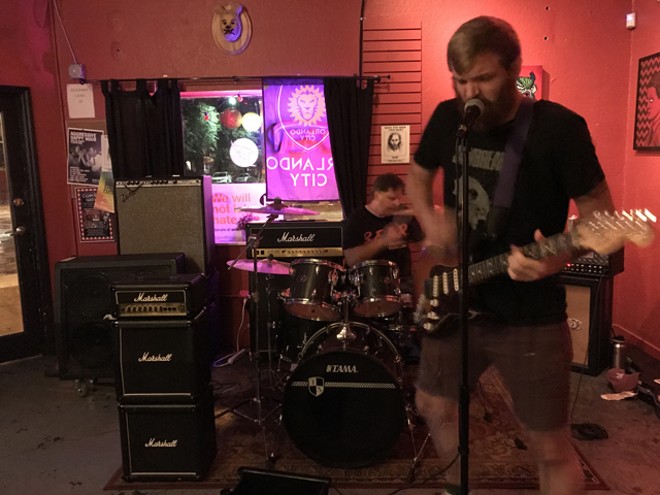 Without question, they’re disciples of ‘90s indie rock. Their commitment to the time and style? Total. In fact, the frontman’s Jawbreaker shirt wasn’t just fashion, it was a foretelling. Once they plugged in, all that implied heart and fire sprang to life (with even a little dash of Archers of Loaf) like lost songs from some of the era’s best bands.

Dull’s music is unflinchingly literal, but it’s done very well. And live, they are all volume, crank and kinesis – a burning commemoration of a beautiful time when loud guitars wove angles into anthems.

In case you didn’t know – and not enough people do – Orlando band Audiotourism are themselves some of the city’s best ‘90s indie-rock revivalists. Despite their name, they’ve been mining that tradition longer and with more depth than the young bands playing tourist to that decade right now. Built on knowledge and taste, their sound is a living composite of the texture, heft and drive that made some of the high-water marks in the underground sound of the day.

Though Audiotourism expanded both their lineup and, of late, their rock arsenal with more aggressive riffs, they broke out their old two-piece band setup and dusted off some older material to complement the touring band for this show. And it was good to hear again.

But before the decibels revved with the other two bands, local musician Scout Stowe opened solo. Her singing is softly soulful, the kind that can effectively straddle indie and mainstream. But there’s something about her that doesn’t completely abide the sweetheart singer-songwriter cliché. And that’s a good thing.

She’s got an easy, earthy pop voice that’s very natural and, so far, not scrubbed of its personality and warmth. Hopefully once she gets pro enough to manage even the fundamentals of her sound at a DIY show (she had lots of outside help here from both the other musicians and audience members), she won’t lose the patina that makes her distinctive and promising.