In-N-Out Burger, an SNL Lounge and every other rumor we've heard about CityWalk Orlando 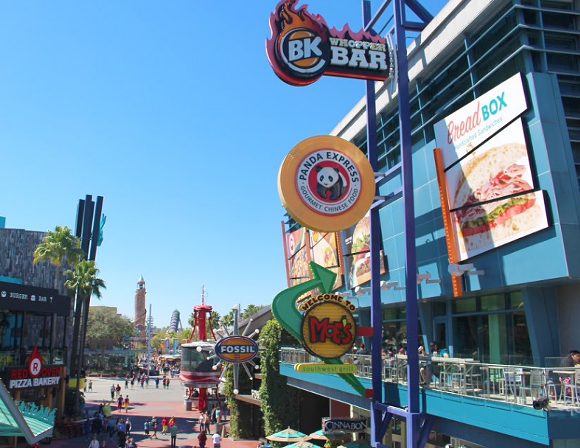 CityWalk Orlando has seen numerous improvements in food and entertainment over the past two or three years. From the handmade pasta at Vivo Italian Kitchen to the chocolate overload at the Toothsome Chocolate Emporium, CityWalk is long past the days when the best thing you could eat there was a specialty Whopper.

With all of these changes, combined with the continuous evolution of guest expectations and tastes, rumors are heating up that we might see a second major overhaul to CityWalk in the coming years.

The biggest rumors seem to point to Bubba Gump and Red Coconut both closing within the next year, despite recent kitchen upgrades. These two venues were originally home to the two-level Motown Café. That concept was overshadowed by the nearby Hard Rock Café, which was essentially the same idea but with wider musical appeal.

Things get interesting when possible replacements for Red Coconut and Bubba Gump are brought up. Universal Orlando parent company NBC Universal loves to cross-promote their television brands in the theme parks (as evidenced by the new Jimmy Fallon ride). At one point, before the Tonight Show theme was chosen for the recently opened ride at Universal Studios, there were rumors of a Saturday Night Live attraction. In the long theme park tradition of "no idea dies," it now seems that instead of a museum and we might be getting an SNL-themed lounge.

An SNL Lounge has been mentioned on guest surveys at Universal off and on for over a year now, but there's still no official comment on the rumor. Based on the strongest rumors, the SNL Lounge would feature props from the 42-year history of the show and themed drinks. The lounge would be more restaurant-focused at lunch, before transforming into a bar in the evenings. A large gift shop would feature both SNL and NBC merchandise. A possible live venue space or stage in the restaurant will feature various comedians who are connected to the show on a regular basis. The Bubba Gump location isn’t the only spot in the rumored running for the SNL Lounge; the Rising Star karaoke bar is also a possible location, though if it ends up there, the rumored NBC/SNL gift shop would be dramatically scaled back.

Just across the street from Bubba Gump, we have our next group of tenants likely to leave. Between 2007 and 2010, CityWalk Orlando saw a major update with the new additions of Element, BK Whopper Bar, Hart and Huntington Tattoo Company, and many others. The majority of these tenants are located in the large multi-story building just to the north of the main entrance walkway. The two-level building features Quiet Flight Surf Shop, Fossil, Fresh Produce, Cinnabon, The Island Clothing Company, and P!Q on the bottom floor. Hart and Huntington has a mid-level access via the Lombard Street-style walkway on the rear of the building. The top level includes the world’s first BK Whopper Bar, which shares a food court with a Panda Express and a Moe’s Southwest Grill.

Rumors point to this entire building possibly getting an overhaul and most or all of the tenants either moving, leaving, or completely remodeling. This is one of the few buildings not to have any major updates, except for tenants coming and going, since CityWalk opened in 1999. With Universal seeing record crowds and the focus moving away from retail to dining and entertainment, it makes sense for Universal to finally update this oddly laid-out and poorly themed building.

On the food front, the longest-standing rumor has to be In-N-Out. This chatter has stuck around from the earliest days of CityWalk. With the closest In-N-Out hundreds of miles away it seems unlikely, but with both Cowfish and Emack & Bolio's, Universal has proven they’re willing to work with brands they like.

Some guest surveys, including the ones that mentioned the SNL Lounge, also suggest a German beer hall may be coming; while that is possible for CityWalk, there have been few rumblings of the like. On the retail front, we again stretch back to the earliest days of CityWalk with rumors of an H&M moving in.

The agreement with Nintendo has also heated up the rumors. There are multiple rumors regarding Nintendo, ranging from a small retro-themed bar to a full-fledged multistory mega-store. The mega-store rumors point to a Dave & Busters-style, Akihabara-inspired geek store that would have a massive Nintendo presence either within it or next to it. This mega-store/attraction could include a Nintendo-based interactive museum, other physical activities like a ropes course or laser tag, an escape room, a bowling alley, and a bar. A robot cabaret show dinner theater, similar to those in Japan, might also be in the works. The most logical place for this huge geek shop and bar is The Groove, which also seems to be on the chopping block, but no particular locations for any of the new tenants have been nailed down. Current plans seem to be looking into whether all of these attractions should be built in a single highly themed venue or broken up into smaller ones throughout CityWalk.

There have also been rumors of Blue Man Group leaving their current location due to new plans in the works for expansions at both Islands of Adventure and Universal Studios. These rumors have been put on the back burner for now, but they haven’t completely died. CityWalk does lack a good live performance theater that can host temporary or semi-temporary shows, such as Wicked and Shrek the Musical, both of which have long been rumored to be coming to Orlando. Guest surveys have mentioned multiple evening entertainment options, including a “Cirque du Soleil-type show.” Universal does seem to be ramping up plans for new experiences outside of the parks, such as dinner theaters and shows, but details on what those new upcharge experiences ar yet to be determined or announced.

Guest surveys have also mentioned possible additions to CityWalk including an indoor skydiving venue and an Apple store. Other aspects of the rumored updates include a new automated robotic valet system, similar to the Carvana "vending machine" coming to Orlando, a Voodoo Doughnut (which just opened at CityWalk in Hollywood), and a major update to the movie theater.

An SNL lounge, an escape room, or a new Cirque-style show could be enough to draw in some of those Orlando visitors who previously were only planning on sticking with Disney Springs or the outlets. If the rumored timelines are correct, we should begin seeing closures as early as this fall with many of the new dining and retail experiences opening between 2019 and 2021.

And that's not to mention the entirely new CityWalk 2.0 that is rumored for some Universal's I-Drive area property.