Rubio and Murphy battle it out in first Senate debate 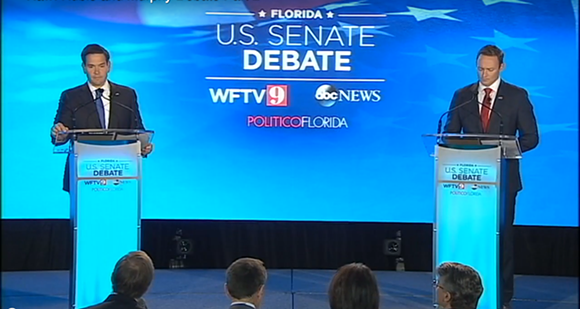 Marco Rubio and Patrick Murphy battled it out in Orlando at their first debate Monday night, trading jabs on their congressional records and their parties' presidential nominees.

Rubio, the Republican incumbent U.S. senator, was attacked repeatedly by Murphy, a Jupiter Democrat, for his continued support of his party's nominee, Donald Trump. In the wake of an audio recording where Trump bragged about kissing and groping women without consent, several women have come forward and accused the nominee of sexual assault. Rubio says both Trump and Democratic presidential nominee Hillary Clinton are "deeply flawed candidates" but still chooses to support Trump because Clinton has "violated federal law" and a "30-year record of scandal and outrage."

Murphy shot back at that answer several times with a similar response: "If you cannot stand up to Donald Trump as a candidate, how will you stand up to him as the president of the United States?"

For his part, Murphy defended Clinton, saying he trusts her and that she's "already apologized" for her use of a private email server while secretary of state.

During the heated hourlong debate at the University of Central Florida, Rubio hit Murphy on embellishments in his academic and professional life, as well as a "record of doing absolutely nothing" during his time in the House of Representatives. On the other end, Murphy swung at Rubio for repeatedly missing votes during his time as a senator. Both men criticized each other's positions on immigration, abortion, foreign policy, climate change and gun control. The tension between the two candidates also extended outside the building, where supporters on both sides chanted loudly before the debate.

Both candidates puttered around a few questions directed to them. When asked if preventing people on the terror watch list from buying guns could lead to racial profiling against lawful citizens, Murphy pivoted back to his stump speech on gun reforms.

"We must close the terrorist loophole, expand background checks to ensure these weapons are not getting in the wrong hands," Murphy says. "We should be investing more in mental health."

Rubio made a similar pivot when asked by a moderator if he could commit to serving a full term in office if he is re-elected.

"God willing," Rubio says. "We are going to get a lot done, god willing, over the next six years."

"This means you are not running for president?" the moderator asks.

"I will be senator over the next six years," Rubio responded.

The next debate between Rubio and Murphy is set for Oct. 26 at Broward College.

« Epcot cancels the Italian flag-wavi…  |  Democrats, independents have edge i… »