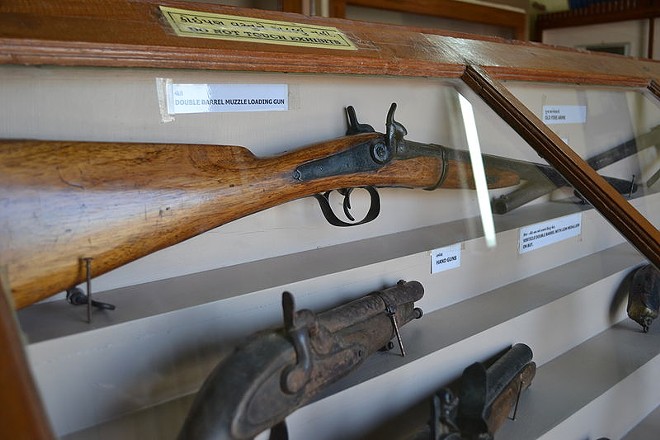 Christopher Weeks donned camouflage and an orange vest and went hunting in February 2012 with a muzzleloader rifle that had been a Christmas gift from his wife.

Then the problems started: A state wildlife officer saw Weeks' pickup truck parked along a road in the Blackwater Wildlife Management Area in Santa Rosa County. And it turned out that Weeks had been convicted of a felony in the past, which led the officer to charge him with violating a law that bars convicted felons from possessing guns.

In a 5-2 decision, justices cleared Weeks on the gun-possession charge because state law treats antique firearms — and their replicas — different from other guns. The ruling said lawmakers exempted firearms manufactured in or before 1918 and their replicas from the prohibition on felons possessing guns.

The majority opinion, written by Justice Barbara Pariente, delved into the details about what could be considered a replica weapon and, in a key issue, rejected arguments that Weeks' rifle didn't qualify because it also included a scope.

"In this case, Weeks wanted to go hunting and, with his wife and his father, researched the law and determined that sections [of state law] allowed him to possess a replica of a 1918 black powder muzzleloader rifle with a percussion cap ignition system. … His rifle was modified only with respect to the attached scope," said Pariente's opinion, joined fully by Chief Justice Jorge Labarga and justices Ricky Polston and James E.C. Perry. "When the felon-in-possession statute is construed in the light most favorable to the defendant, Weeks' rifle's attached scope did not remove his firearm from the statutory exemption."

Justice Charles Canady wrote a concurring opinion that was joined by Labarga and Polston.

But Justice R. Fred Lewis, in a dissenting opinion joined by Justice Peggy Quince, wrote that scope disqualified the rifle from being considered a replica.

"Although the firearm may have relied upon an ignition mechanism used by similar firearms before 1918, it also featured a scope that was not found on weapons that were available in 1918," Lewis wrote. "In my view, such a firearm cannot constitute an antique firearm as defined by Florida law."

Weeks, whose father is a retired law-enforcement firearms instructor, pleaded no contest to the charge of possession of a firearm by a convicted felon and was sentenced to three years of probation, the majority opinion said. Despite the plea, he appealed based on arguments that the part of the law dealing with replica firearms was unconstitutionally vague.

In a brief filed last year, Weeks' attorney wrote that the muzzleloader, which was purchased at a Bass Pro Shop, was similar to a gun from the Civil War era.