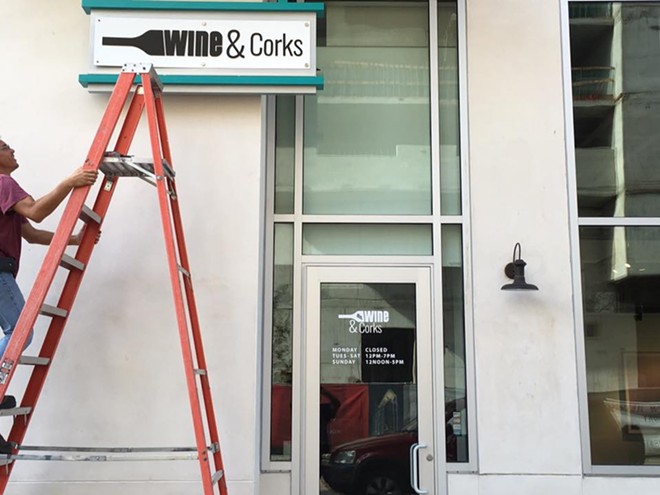 Boutique wine shop Wine & Corks has opened at 420 E. Church St. With the downtown arm of the Snap! Orlando gallery and teashop Tea Cupcake Experience already resident, this seems to be another step in the quest of the 420 East apartment building to offer the most sophisticated amenities of any building in town.

As reported earlier, the Orlando Cat Café has at long last opened in Cagan Crossings in Clermont. Guests can hang out with pre-screened, adoptable kitties for a fee of $8 ($4 for kids), or reserve a spot in a "yoga with cats" or "painting with cats" class – plus, of course, there are snacks and lattes. But let's be honest, you'll be there for the cats, not the coffee.

There's stiff competition between Cuban restaurants in Orlando, but Rice & Beans Cocina Latina is one of the most popular. (Their $10 bottomless mimosas all day, every day, might have something to do with that.) Now another Rice & Beans is open in the Aloma Shopping Center in Winter Park.
Colibri Mexican Cuisine Baldwin Park has been joined by Colibri Mexican Cuisine SoDo, now open in the former Egg & I location in Downtown South.

Yesterday was the grand opening of the Taste of Yucatan at 1375 S. Semoran Blvd. near Curry Ford Road. Peep the menu here and start getting excited about a new spot that goes beyond the run-of-the-mill with Yucatan-style offerings like vaporsitos, cochinita pibil and salbutes.

Mary's Sidebar Café, by the same folks behind Hamburger Mary's, will open next door to the burger joint in the former Dessert Lady space on Church Street next month. The cafe will be open for breakfast, lunch and dinner and will also offer desserts.

The Ivanhoe Village outpost of cut-above Clermont Mexican bistro Mesa21, which has been planning to open in the former Gargi's space on the shore of Lake Ivanhoe, has pushed their planned opening date forward to November.