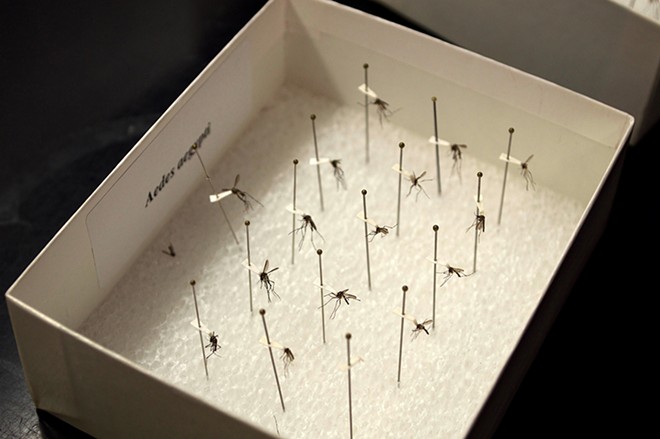 In a late-afternoon conference call, Stewart said as part of a "spill the water campaign," classroom materials were being distributed to teachers and administrators across the state so that they can encourage students "to take simple steps in order to help prevent Zika," including removing standing water, using insect repellent and wearing protective clothing.

"They can help students become ambassadors and help prevent the spread of Zika," Stewart said.

Stewart also said public schools, state colleges and universities in Miami-Dade, Broward, Palm Beach, Martin and Monroe counties were informed that the state would provide each campus with mosquito repellent. She said the South Florida region was targeted because it remains at "the greatest risk" for the local transmission of the mosquito-borne disease, which is particularly dangerous to pregnant women because it can cause severe birth defects.

The conference call came as the Department of Health on Thursday announced the number of Zika cases has reached 486, nearly doubling the cases since July 1. That includes 57 cases involving pregnant women. Cases have been reported in 33 of Florida's 67 counties.

An additional 21 travel-related cases were reported Thursday for a total of 404. Those cases stem from people who were infected elsewhere and brought the virus into Florida.

Florida Surgeon General Celeste Philip said state health officials continue to believe all the locally transmitted cases are centered on a one-mile area in the Wynwood community near downtown Miami. The federal Centers for Disease Control and Prevention has warned pregnant women not to travel to the area.

Scott, who met with CDC officials in Miami last week, said he has yet to hear from the federal government on his requests for 10,000 Zika prevention kits for pregnant women or on a plan that would allow Florida access to funding through the Federal Emergency Management Agency.

Scott has authorized state health departments across Florida to provide assessments and testing for pregnant women who request it.

The Department of Health on Thursday also provided a breakdown of how the state is allocating funding to combat the Zika virus.

Some $6.87 million in federal funding has been allocated, including $5 million for mosquito control in local districts, the department said.

"Since Gov. Scott authorized these emergency funds, the state has been fulfilling requests made by local communities so they may take the proper actions to protect their residents," said Mara Gambineri, a spokeswoman for the Department of Health. "Every community that has requested funding has received an allocation and we will continue to work closely with them to meet their needs."

While he has expressed disappointment in Congress' failure to pass a broad Zika funding plan, Scott said state officials will "keep doing everything we can" to limit the outbreak. "If we need more (funding), we'll fund more," he said.

In Washington, U.S. Health and Human Services Secretary Sylvia Burwell on Thursday said she has authorized shifting some $81 million in her agency to keep research moving forward on a Zika vaccine.

"The failure to pass a Zika emergency supplemental (appropriation) has forced the administration to choose between delaying critical vaccine development work and raiding other worthy government programs to avoid these delays," Burwell said in a letter to Congress.

U.S. Sen. Marco Rubio, R-Fla., said in a statement that the Zika funding impasse "never should have gotten to this point."

"As soon as Congress reconvenes, we should resolve this issue once and for all," Rubio said. "This public health crisis is no place for politics."