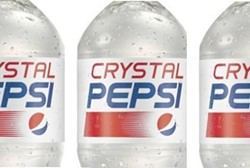 Once upon a time, sweet Millenials, the Cola Wars were a thing.

The Coca-Cola Company and PepsiCo went at it with dueling products that finally ended with definitive answers on either side of the "Is Pepsi OK?" question at restaurants all over the world.

In 1992, PepsiCo challenged the Coca-Cola Company by stripping all the caramel color out of their soda/pop/Fizzy Lifting Drink and marketing it as "Crystal Pepsi." Coke didn't bite — well, not directly. Saying "clear Coke is an oxymoron," the Cola-Cola Company chose to make "Clear Tab" instead of clear Coke, in response to Pepsi's dare.

Now, since it's becoming clear that the mid-2010s are really just the 1990s all over again (short-alls are at Old Navy right this sec, BTW, and Lisa Frank just released a line of clothing for RageOn), Pepsi is bringing back Crystal Pepsi in stores for eight weeks starting today. The 20-ounce bottles are available at major retailers, and when we see them, we'll update this blog post with locations.

If you can't find any Crystal Pepsi anywhere, you could always park yourselves outside the bottling and distribution center at 1700 Directors Row, just off South Orange Blossom Trail. (Tip: They have vending machines outside that sell cans of Pepsi products for 25 cents. Score.)