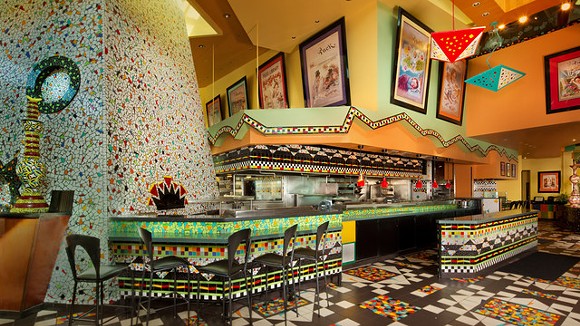 With all of the big changes that have been happening at Disney Springs (formerly Downtown Disney), we’ve seen the introduction of more than a half-dozen new dining options and improvements to many others. Two of the older restaurants that have to yet to update now might be opting to move out instead of doing costly upgrades.

Bongos Cuban Cafe and Wolfgang Puck Grande Cafe were both part of the opening lineup for the West Side expansion that opened in 1997, which also included the opening of DisneyQuest, Cirque du Soleil, House of Blues, the Virgin Megastore and a Sunglass Hut (now branded as a Sunglass Icon by Sunglass Hut).

However, both Bongos and Wolfgang Puck are now rumored to be closing rather than updating.

With all the new restaurants in the nearby Landing and Town Center areas of Disney Springs, some of the older, more established venues have had new competition. House of Blues addressed this with a new BBQ walk-up window joint while others, like Planet Hollywood, opted to rebrand entirely.

According to Disney insider Jim Hill, Disney was pressuring Bongos and Wolfgang Puck to update their kitchen and menu. The kitchen upgrades would likely have cost upward of $10 million, and both restaurants seem to be much less popular these days. That being said, Wolfgang Puck at Disney Springs ranked 28th most profitable independent restaurant in the nation, raking in $15.8 million in sales in 2015.

Of course, high sales haven’t stopped Disney from reimagining other restaurants; nearby in the Landing, the former Fulton’s Crab House is being completely reimagined as Paddlefish. Last year Fulton’s ranked 11th in the nation’s most profitable independent restaurants. However, with declining numbers and a plethora of new competition, both at Disney Springs and throughout Walt Disney World, leaving the property might be the best option for both.

When Bongos opened it was part of a larger restaurant chain, still owned by Emilio and Gloria Estefan. There were mentions of the chain expanding but there are only two remaining locations after the flagship in downtown Miami closed in 2014.

To understand the bigger picture of what’s happening next door at Wolfgang Pucks, we have to go back to 2001 when Disney opened the biggest flop in the history of their theme parks, Disney’s California Adventure. Wolfgang Puck opened an upscale lagoon-front restaurant, Avalon Cove, in the new park. The multimillion-dollar restaurant was a showcase of Puck’s culinary treats, featuring his famous California-style pizzas and a mix of other American coastline-inspired dishes.

Like most of the park, the restaurant never saw the crowds promised. Disney had initially expected attendance at the park to be around 19,000 a day but by the fall it was averaging only 4,500 per day. Also, the events of Sept. 11 didn’t help matters any and by October, Wolfgang Puck shut down the failing restaurant, a mere nine months after opening.

Again, according to Jim Hill, this experience left a sour taste in Puck’s mouth that caused him to look at future pitches by Disney with a healthy dose of skepticism.

That skepticism, mixed with the high costs of updating the very 1990s-Pop stylings of Wolfgang Puck, might just be enough to have pushed Puck out of Disney World. Oddly enough, the Wolfgang Puck Café in the Marketplace district is rumored to remain open. It remains popular and has a decent fan following.

If Wolfgang Puck left Disney World there would be plenty of options for him in the Orlando market. Wahlburgers has seen success with celebrity-branded dining in downtown, and the Avanti Resort on I-Drive is currently planning a 22-story hotel tower that will house a celebrity chef-branded restaurant in its base.