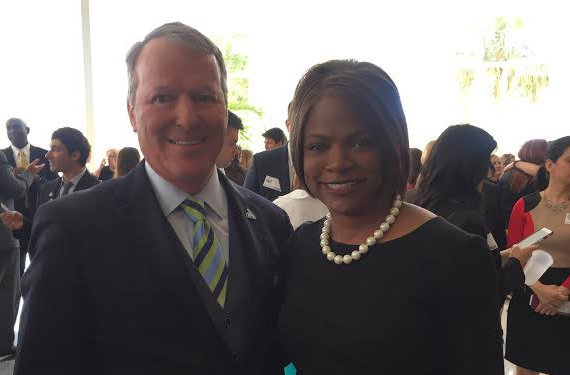 Orlando Mayor Buddy Dyer is endorsing his former employee, Orlando Police Chief Val Demings, in the race for the state's 10th Congressional District, according to the Democratic candidate's campaign.

"Under Chief Val Demings' leadership, Orlando saw the most dramatic decrease in violent crime in the city's history," Dyer says in a statement. "I had the honor of working alongside Chief Demings as she implemented programs like Operation Positive Direction, a youth mentoring program that is still in place today and helping to make our neighborhoods stronger. Because of her commitment, Orlando is a better place today. I know she will bring that same passion for her community to Congress and I'm proud to endorse her in Florida's 10th Congressional District Race."

In a statement, Demings says it was a privilege to work under Dyer.

"As the city of Orlando has grown at a record pace, he has made public safety a top priority," she says. "My historic appointment as the first female chief of police shows Mayor Dyer's commitment to breaking barriers for women and minorities at the highest levels of leadership."

The seat is currently held by U.S. Rep. Daniel Webster, who chose not to run after he said Florida's redistricting process made his seat unviable for a Republican candidate. Florida Sen. Geraldine Thompson, former Florida Democratic Party Chair Bob Poe and lawyer Fatima Fahmy are competing against Demings for the Democratic nomination.

« Gov. Rick Scott on joining Donald T…  |  The luckiest dog in the history of… »