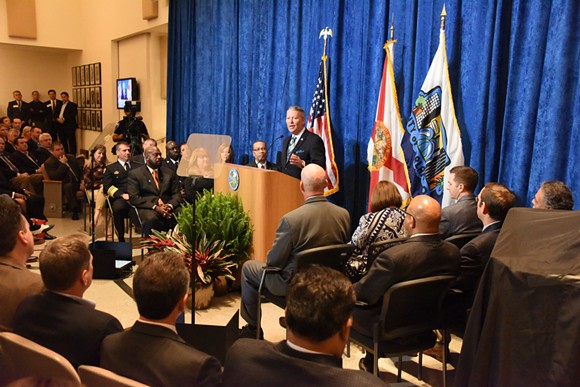 At his annual State of the City speech, Mayor Buddy Dyer outlined what Orlando has to do to become a defining city of the 21st Century.

"In the century ahead, it’s cities that connect innovation, transportation, opportunity and quality of life together that will drive our country forward," he says. "...We must become Orlando: The City Connected."

Dyer highlighted $10 billion that regional governments have invested in transportation projects, such as SunRail expansion into Kissimeee, the I-4 Ultimate Project and the Brightline, which goes from Orlando to Miami.

The city is also exploring initiatives like the launch of the FireSpring Fund, which provides seed funding for technology and advanced manufacturing entrepreneurs in Central Florida, and appointing a senior adviser on homelessness and social services who is dedicated to solving the issue in the city.

« Arguably the largest gator to ever…  |  Local authorities are now ticketing… »

Speaking of Buddy Dyer, state Of The City