Student government elections at the University of Central Florida have been pretty weird this year, involving everything from alleged campaign violations to a Trump look-alike.

Like the U.S. presidential elections we’ve come to hate, out of the ashes of politics-per-usual comes a crazy train you just can’t get off. All aboard the Anthony Safadi Express.

Safadi, a biomedical student at UCF, announced his candidacy for SGA president later than other presidential candidate, but he came wearing a blonde wig and a “Make UCF Great Again” campaign slogan.

The Trump impersonator is taking it very seriously, and he’s already claiming to be president on his personal Facebook. In a video posted by Safadi on his campaign Facebook page, he says, “As many of you know, the University of Central Florida is accepting many refugees who we know nothing about, and this poses a great national security threat … which is why I propose that we send them back, or to the University of South Florida.”

Before Safadi joined the presidential race, things had already taken a turn for the strange when UCF student Jake Milich found himself in hot water for allegedly announcing his candidacy for student body president before the official date determined by the university.

The student election commission set a date for a closed hearing to decide if Milich should remain on the ballot. UCF closed the hearing to the public after Milich chose not to waive his rights under the Family Educational Rights and Privacy Act (FERPA), a federal law put in place to protect students’ personal and educational information. Milich was later adamantly against the closed hearing, and he filed a lawsuit on March 14 against several members of the university and current Student Government Association president Cait Zona for violating his free speech rights.

"I’ve been warning UCF that it needs to change its policies to comply with the law since before the elections," Milich says. "This legal mess could all be avoided if UCF would make those changes or require everyone in student government to sign a FERPA waiver so everyone has to play by the same rules. This would promote transparency. UCF is choosing to have this Catch-22." 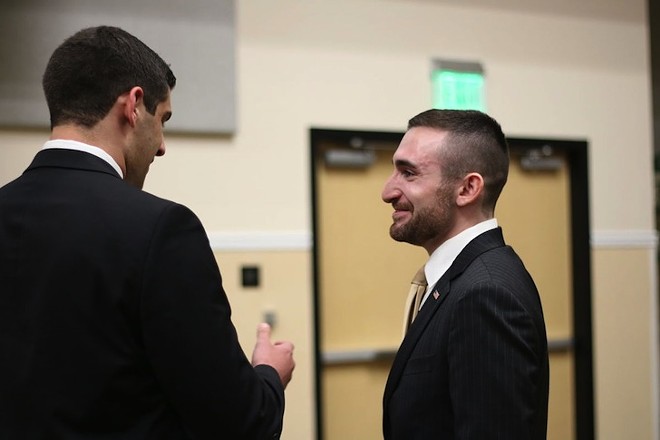 His campaign was suspended by the election commission on March 22 after being charged with nine campaign violation affidavits. Milich told Fox News on Monday that UCF was a liberal campus, which puts him in the minority among his fellow students.

"It's a coordinated effort against me because I'm a conservative, as well as my running mate, Elaine Sarlo, is actually the president of College Republicans at UCF," Milich says regarding the election commission's decision to suspend him.

But Milich isn’t the only punching bag in this boxing match. Fellow SGA presidential candidate Christopher Clemente and running mate Rachel Altfield have also had campaign violations hurled their way.

Two accusations were made that the duo created their Facebook page before announcing their candidacy and that it misrepresented the campaign. The election commission voted unanimously to clear Clemente and Altfield of those violations on March 25.

However, another violation was made against them claiming one of their campaign signs was moved to cover a Milich campaign sign. The election commission cleared Clemente and Altfield of the alleged violation today.

"Individuals do have the power to file violations. If they want to do that on their own volition, that is completely up to them; however, it would be nice if they actually had merit," Clemente says.

At a debate between Safadi and Clemente with their respective running mates last week, Safadi pointed out that half of the student government is involved in Greek life, which doesn’t accurately represent the student body.

Voting for the next SGA president is currently under way and will continue until Wednesday. Whether it will be the Safadi or Clemente, the question remains—who’s been pulling the strings this entire time?