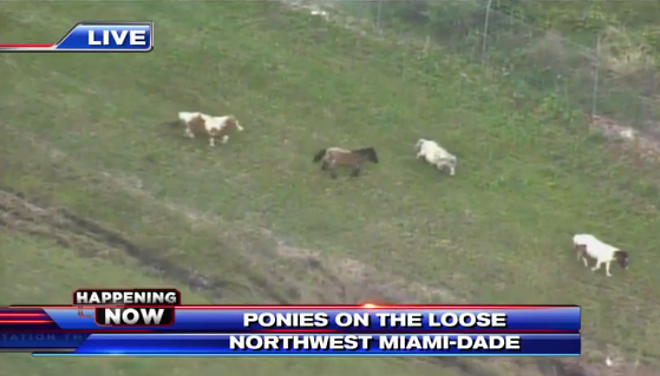 Early Wednesday morning, a herd of cute, pint-sized horses escaped and trotted down the Florida Turnpike.

The five horses (possibly Shetlands), were loose for more than hour, leading Florida Highway Patrol on a chase near northwest Miami-Dade, between Red Road/57th Avenue and I-75, reports MyFox8.

The renegade herd was spotted at approximately 8:45 a.m. At this point, it's unknown where the horses came from and how they escaped.

Heads up drivers! There are ponies running loose near the Turnpike, between Red Road and I-75. https://t.co/Bzw44R7V63

Apparently, the ponies were safely corralled at around 9 a.m. after horsing around in the grass.


By 9 a.m., the group of ponies had turned around and made their way to a residential neighborhood just off the roadway, weaving in and out of backyards and even stopping for a drink at a small pond before a resident was seen waving them away.

The chase finally came to an end around 9:20 a.m. after the ponies were seen being corralled back behind a white fence at a home.

The group stopped for water, and were seen rolling around and playing in the grass after their eventful morning.

The residence appears to be the home of the ponies, but that has not yet been confirmed.