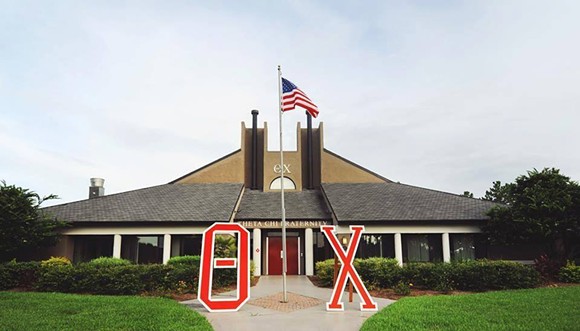 University of Central Florida officials say they have terminated a housing contract for Theta Chi after members of the fraternity threw a house party that violated the lease agreement regarding alcohol, fire safety and disregard for property.

Thirty-five men currently living in the house must leave by the end of the semester, says UCF spokesman Chad Binette in a statement.

"The UCF Police Department responded to a fire alarm at Theta Chi around 8:45 p.m. Nov. 19.," the statement says. "Officers found a bicycle lock placed around the front door, preventing people from entering or leaving that way. They also found multiple people passed out and intoxicated - one was treated and released at an area emergency room — and no apparent measures to prevent underage people from drinking...This behavior clearly does not reflect the values we expect our students to uphold, and we acted swiftly to address it."

A termination letter from UCF Housing and Residence Life to the president of the fraternity says:

"During the past few years, the University worked with the fraternity to resolve numerous issues and actions, which individually could have constituted a default of the Lease. The current actions of the fraternity are intolerable and demonstrate an unwillingness to comply with the covenants and conditions of the lease."

According to the Orlando Sentinel, That Chi was cleared in September after denying that they served alcohol to people who were already drunk and people who were underage at an off-campus party.