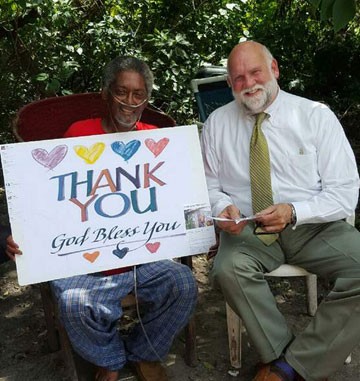 When Larry Thompson was arrested by the Orlando Police Department in August for failing to pay courts costs on 2010 charge of driving without a license, the then 61-year-old Thompson appeared in his mugshot with tubes from his portable oxygen tank in his nose. He was so physically fragile, the Orange County jail sent him to the hospital, where he was chained to the bed.

His arrest prompted Orange-Osceola Public Defender Robert Wesley to call for the end of "low value" arrests of people who can't afford court fines. Thompson's story went viral, and he was featured on Last Week Tonight with John Oliver in September.

Thompson was freed after people donated money to pay his fines, Wesley says on his blog. A month after Thompson was arrested, Ninth Judicial Chief Judge Fredrick Lauten voided 21,000 arrests for people who did not show up to collections court and promised to stop jailing them in the future.

"His case illustrated the situation of thousands of needy people in this community who can’t afford to pay court ordered fines," Wesley writes. "Arresting them for fines they can’t afford to pay needlessly drains police and other public resources...Larry Thompson's suffering made a difference."