Kappo closing at end of December; East End Market space will host a Japanese market instead 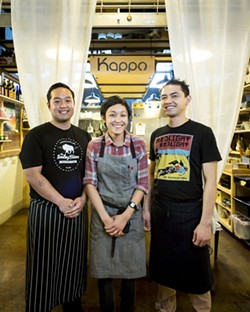 Kappo at East End Market, one of our Top Tables of 2014 and a featured restaurant in this year's edition of BITE magazine, will close by the end of the year, the owners say.

The Orlando Sentinel reports that an email was sent by Lordfer Lalicon, Jen Banagale and Mark Berdin stating: "We would like to let you know that December will be our last month of Omakase service at Kappo in the East End Market." The restaurant struggled with health inspectors earlier this year, who insisted a plastic sneeze guard had to be installed at the seven-seat kappo-style bar.

Replacing the restaurant will be East East End Market's take on a konbini, or Japanese convenience store. East End developer and founder-owner John Rife told us via email today that Lalicon, Banagale and Berdin will be involved in the new market.

Although konbini are known as brilliant spots for cheap, high-quality pre-packaged food, the East End version will probably not contain, as many Japanese konbini do, an ATM, fax/photocopier, ticket seller, post office/courier service, or utility payment center, nor feature the fluorescent lights and 24-hour service of the typical konbini. But we are quite sure they'll handle the tasty snacks part in style; Kappo already has a few shelves and a cooler case stocked with yuzu sorbet, match milk tea, marshmallows and lots of other Japanese goodies.

The Kappo chefs have expressed interest in developing a stand-alone restaurant in the past, and their email alludes to them making strides toward that goal now. We've reached out and will update this post with any new information on a Kappo restaurant outside East End.

UPDATE: Lordfer Lalicon emailed us to confirm that the Kappo team will indeed be involved in the konbini, saying: "We will be owners/operators of the Konbini store, East End has no say or part in the store." We look forward to hearing more about Lordfer, Banagale and Berdin's plans for the konbini, and we continue to hold out hopes that they will bring their unique dedication and skills to a new stand-alone restaurant.