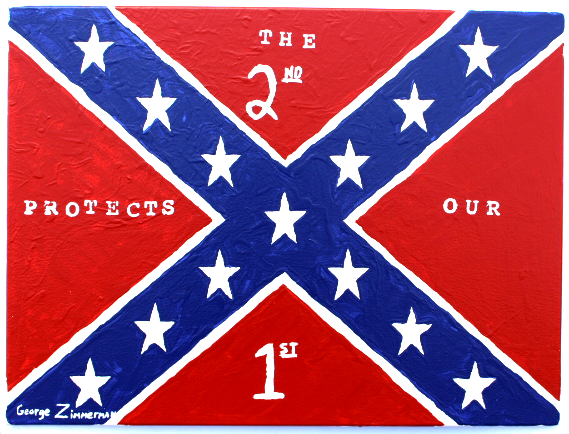 George Zimmerman has come out of the woodwork again, this time to support a “Muslim-free” Florida gun store by selling his artwork.

Andy Hallinan, the owner of Florida Gun Supply in Inverness, Florida, posted a weird YouTube video in July declaring his store a “Muslim-free zone” because of the recent Chattanooga shootings.
The Council on American-Islamic Relations wasn’t too fond of banning people that look Muslim, so they sued Hallinan for violating federal laws that prohibit discrimination based on religion in public accommodations.

Zimmerman was painting an American flag when he heard about Hallinan being sued by CAIR, so he decided to repaint it with a Confederate flag "in honor of Andy Hallinan for being a true patriot and leading the country into a better, safer America," according to the Florida Gun Supply website.

The writing on the painting refers to "both the Bill of Rights as well as the two flags on this canvas. You cannot have the 1st amendment without the 2nd, and you cannot have the American Flag if you remove the Battle Flag."

The proceeds will be split between the two for "legal funds, living expenses and advancing their mission to change the country," the website says. It seems Zimmerman and Hallinan were so happy with their new friendship, they even made a mini-documentary on it.